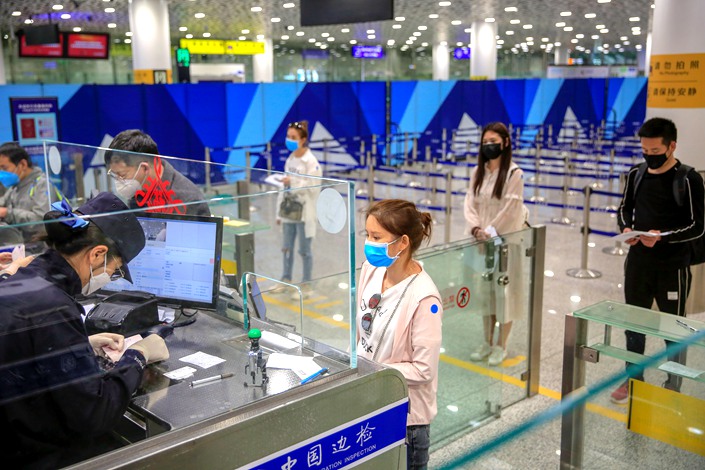 Almost all of China’s newly reported coronavirus cases over the last few weeks have been so-called “imported” cases. Photo: VCG

China’s aviation regulator has issued guidelines to significantly cut international flights into and out of the country, in an effort to reduce the number of Covid-19 cases arriving from other countries.

Starting from Sunday, all domestic airlines will be limited to flying one international flight per week to each country, the Civil Aviation Administration of China (CAAC) said in a notice (link in Chinese) on Thursday.

Foreign airlines were also ordered to limit their number of flights into China to no more than one per week, according to the notice. The CAAC has told airlines to submit plans and not fill airplanes beyond 75% capacity.

Shortly after the CAAC announcement, the Ministry of Foreign Affairs and National Immigration Administration announced that foreign nationals with valid visas or residence permits would be temporarily banned from entering the country, starting Friday. These moves have come has China has shifted its focus from controlling its domestic outbreak to reducing the risk of imported cases.

With implementation of the new guidelines, the number of international flights into China every week is expected to drop to 133 on average, down 90% according to Caixin calculations. The daily number of travelers arriving in China is expected to drop to 5,000, down from 25,000 previously, according to caacnews.com, a news service affiliated with the CAAC. No limits have been set on cargo flights.

Zheng Hongfeng, an analyst at consultancy VariFlight, said that the plan to cut flights has been in the works for a while. Almost all of China’s newly reported coronavirus cases over the last few weeks have been so-called “imported” cases. As of end of Thursday, the Chinese mainland had recorded a total of 595 imported cases, including 54 reported on Thursday.

Despite the government’s move to severely restrict foreigners entering the country, 90% of the imported cases have been returning Chinese citizens, according to Vice Foreign Minister Luo Zhaohui, almost half of whom are international students. China may consider sending government-chartered flights to collect nationals overseas who want to return to the country, if there is demand and conditions allow, caacnews.com reported.

On Thursday, Shanghai become the latest major Chinese city to make it mandatory for all international arrivals to take a nucleic acid test for Covid-19 and undergo 14 days in quarantine. The same policy had already been implemented in Beijing and Guangzhou.

In a news briefing last week, Jiang Yuan, a Shanghai customs official, said about 500 additional staff would be dispatched from other departments to the city’s airports to deal with inbound travelers. A total of 1,132 customs staff were working “around the clock,” Jiang said. Wu Jinglei, an official with Shanghai’s health commission, said at the time that healthcare workers have also been dispatched to help carry out nucleic acid tests.