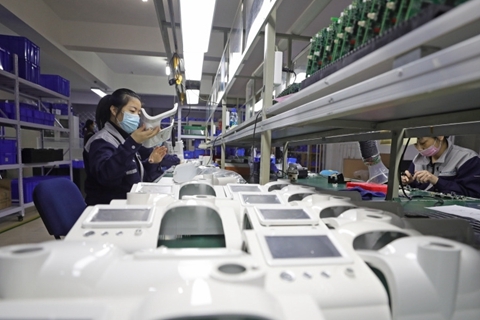 As the gravity of the coronavirus epidemic shifts to Europe and the U.S., people in China widely believe availability of medical resources needed to tackle the virus remains a big problem in these places. For some critical equipment, such as ventilators, actual demand could be 10 times current available supply, such belief goes.

At first glance, this kind of belief sounds reasonable. But I’ve decided to dig deeper into the issue using available data.

After some research, my initial conclusion is, I’m not sure about Europe, but overall in the U.S. there seems to be no shortage of intensive care beds or ventilators.

In terms of ventilators, a report from Johns Hopkins University said there are currently 160,000 in the U.S., 60,000 of those full-feature machines and the other 100,000 basic models. Although the basic models may not be as good as the full-feature ones, they are still critical in the fight against the virus. The federal government also has a reserve of another 12,700 ventilators.

The major problem for the U.S. lies in its difficulty ramping up ventilator production. In every state the governor has gone into a state of frenzy. Take New York state, epicenter of the U.S. epidemic, as an example. There are currently 6,000 ventilators there, and another 4,000 are on the way from the federal government. But the governor feels that is far from enough, saying at least 18,000 are needed.

I think President Trump may be very aggravated by such demand. Does each state really need that many ventilators, he must be thinking. I don’t personally like Trump, but I am left with the same question.

According to calculations commonly accepted by U.S.-based institutions, 5% of total Covid-19 infections would need to be put in intensive care; 2.3% would need treatment with a ventilator. Based on those figures, 10,000 ventilators in New York state would be enough to handle at least 400,000 infections – even as the current recorded caseload for the state stands at 40,000.

The anxiety among some Americans is largely driven by current virus models that have predicted huge numbers of infections, leading them to imagine large future demand. After comparing projected demand with currently supply, combined with realization that output will be hard to increase anytime soon, they are becoming anxious as they feel the gap could be quite large.

Three points may help to lessen such anxiety among many Americans. First, the projected infection numbers based on current models are generally too high, way higher than the current reported infections. Second, a single ventilator could be shared by more than one person. Third, the government can freely deploy any ventilator for flexible allocation if necessary, no matter where it is and who it belongs to, by invoking the National Defense Mobilization Law.

After a rough calculation, we can conclude the current stockpile of 160,000 ventilators in the U.S. can simultaneously meet the demand if 8 million people are infected. Considering that ventilators can also be transferred for use in more than one location, existing U.S. supply should be enough to fight the coronavirus. In addition, U.S. inventory will increase as the government mobilizes big manufacturers like General Motors to ramp up production.

If a ventilator shortage really occurs in the U.S., it will probably be more equivalent to an average American lacking a big house after already owning an apartment. That’s far different from many other countries, where the ventilator shortage is a matter of life or death.

After becoming clear on the U.S., I began to ponder the situation in China. I asked myself how many ventilators are there in the country? What is the production capacity? It took me a while to find information, which may be incomplete. But it’s something like this.

The number of intensive care beds per 100,000 people in China stood at 4.8 in 2015, far lower than the U.K., according to data I found. For ventilators, I found that China had placed orders for a total of 14,700 in 2018, though there was no data available for the current supply.

Since the coronavirus first emerged in December in Wuhan, Hubei province, China has shipped a total of 14,000 non-invasive ventilators and 2,900 invasive ones there, mostly to Wuhan. Those two numbers add up to 17,000, or more than the total orders figure I found for 2018.

After comparing China’s situation to the U.S., things are much clearer.

In Wuhan, China is fighting a battle it can’t afford to lose using national medical resources it has sent there. The virus needs to be contained within the city. It needs to be stopped from traveling out to create major outbreaks in other parts of the country. We can’t afford to have all of China become Wuhan.

The reason for doing it this way is simple. Given China’s relatively limited medical resources – its per capita number of intensive care beds and ventilators is far too small – Beijing can’t afford to fight a prolonged battle with the coronavirus.

The county can only concentrate its fight on one front, and thus is transporting all the medical equipment it can there, and sending all the medical personnel it can as well. China can only mobilize its national medical resources to tackle the virus head-on in Wuhan. If this battle fails, the fate of the country is at stake.

People in Wuhan and Hubei had no choice but to sacrifice themselves.

This is the luck of the Chinese people and the misfortune of the people of Wuhan and Hubei.

People blessed with luck need to be grateful.