By Bao Zhiming and Matthew Walsh 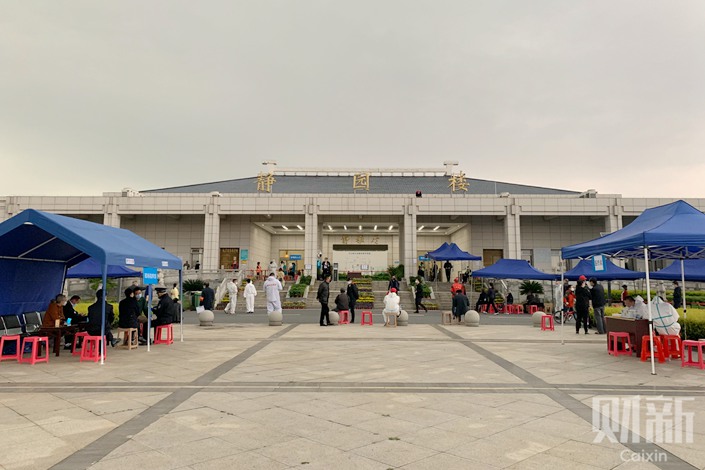 People line up to receive the ashes of their loved ones Thursday at Hankou Funeral Home in Wuhan, Central China's Hubei province. Photo: Ding Gang/Caixin

At around 8 a.m. on Thursday, Liu Ping joined the long line of people at the Hankou Funeral Parlor in Wuhan and waited to collect her father’s ashes.

Like the hundreds of others in the queue, Liu — who requested a pseudonym out of respect for her privacy — had come to the undertaker’s in the north of the disease-ravaged central Chinese city after authorities on Monday began allowing some people to collect the remains of those who had died during the height of the Covid-19 epidemic.

The move is part of a gradual loosening of quarantine restrictions in Wuhan as the threat of the outbreak appears to abate. The city, which has a population of about 11 million, confirmed the world’s first cases of the highly infectious lung disease in December. Since then, Wuhan has logged about 50,000 cases and more than 2,535 deaths, more than any other city in the world.

Although Covid-19 has since become a pandemic that has so far spread to half a million people worldwide, killed more than 24,000, and convulsed the global economy, life at the epicenter of the outbreak is now taking the first tentative steps toward normality.

On Tuesday, the provincial government of Hubei, where Wuhan is located, announced that transport restrictions in the city will be formally phased out from April 8, more than 70 days after authorities enforced a dramatic and unprecedented lockdown in a bid to check the spread of the virus. The number of new Covid-19 cases in Wuhan has dropped to near-zero in recent days after posting triple-digit daily rises just weeks ago.

The easing of those constraints gives communities a chance to grieve for those who have died during the outbreak, whether from Covid-19 or other causes.

Liu’s father was one of the latter. He was already hospitalized with brain cancer when the city’s Covid-19 crisis deepened in late January. To make room for a surge in patients, Liu’s father returned home, but his condition deteriorated as he became unable to access the care he needed. Despite being readmitted to the hospital in early March, he died within a few days.

“Although my dad didn’t die because of Covid-19, it killed him indirectly,” Liu told Caixin.

Many of the bereaved regret that they weren’t able to give their loved ones proper sendoffs. Strict quarantine requirements prevented friends and relatives from being at their bedsides when they died. At the height of the city’s epidemic, some undertakers were so busy that deceased patients lay in their hospital beds for hours before being removed.

Even now, people are far from free to pay their respects however they want. On Thursday, as smoke billowed from the chimney of the Hankou Funeral Parlor’s crematorium, mourners sat on widely spaced plastic chairs to minimize human contact, while workers in full-body protective gear reunited them with the deceased. To prevent another surge in infections, city authorities plan to suspend in-person visits to grave sites through Qingming Festival, a traditional festival to honor the dead also known as Tomb Sweeping Day that this year falls on April 4.

Only one member of a dead person’s next of kin is allowed to come collect their remains. After arriving, Liu took a numbered ticket from a machine, passed her father’s death certificate and ID card to a staff member, and filled out a form. After that, she received a voucher bequeathing her a free urn made out of jade. Liu chose a white one in a shade her father particularly liked.

Liu’s number was called at about 2 p.m., six hours after she arrived at the funeral parlor. At a service window, she handed over the empty urn. It came back weightier and adorned with red ribbons.

Throughout the day, the main hall of the building was peaceful save for the occasional sound of weeping. Liu remained quiet throughout. “I’ve already cried all of my tears,” she said. “The only thing I want now is to give Dad a good sendoff.”