Hubei’s Months of Lockdown to End as Virus Risk Recedes 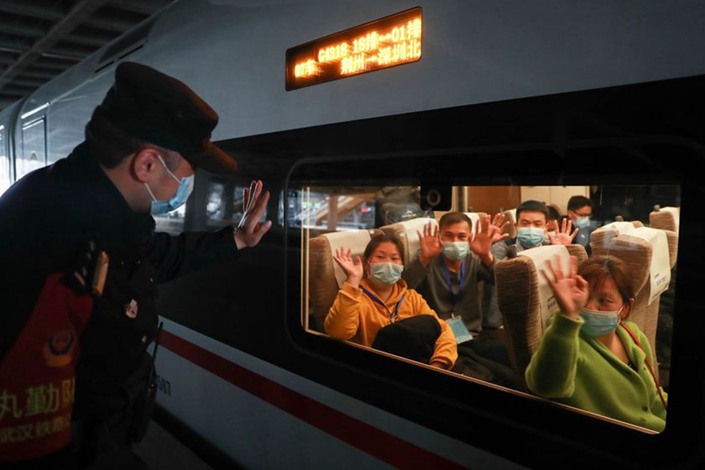 A train departs from Wuhan, Central China’s Hubei province, for the first time since the city of 11 million was put under lockdown in late January. Photo: IC Photo

Chinese authorities will this week start to remove quarantine measures in the central province of Hubei, where the Covid-19 pandemic first erupted, as the country looks to revive a national economy that has nearly ground to a halt amid the outbreak.

Starting Wednesday, interprovincial transport restrictions will be eased in an “orderly” fashion across Hubei with the initial exception of the city of Wuhan, according to a notice (link in Chinese) on the Hubei provincial government’s official website. Constraints in Wuhan will be relaxed from April 8, prior to which some people who work outside the 11 million-strong city will be allowed to return to their posts as long as it is safe to do so, the notice said.

The announcement comes two months after the government placed Wuhan and other cities in Hubei under an unprecedented lockdown in a bid to control the spread of a previously unknown coronavirus. Despite those efforts, the disease spread first across China and then worldwide, killing more than 16,000 people to date.

In Wuhan, where health officials had logged more than 2,500 coronavirus-related deaths (link in Chinese) as of Monday, authorities will encourage businesses to reopen on a conditional basis according to continued evaluations of the threat to public health, the notice said, adding that officials would “actively and methodically” encourage people across Hubei to go back to work while minimizing the losses caused by the outbreak.

Additionally, after weeks of empty classrooms, schools and colleges across the province will finally be able to welcome back students, with reopening dates “to be determined following scientific assessments,” the notice added.

Officials will monitor the flow of people moving through the province by checking so-called health codes issued through popular smartphone apps, the notice said. The codes, which effectively allow the recipients to prove that they do not have Covid-19, will supplement existing local procedures for obtaining permission to travel.

The relaxation of quarantine measures at the center of China’s outbreak is the latest sign that the country’s leaders are becoming increasingly confident that the virus has been brought under control.

As the number of new cases has slowed, many province-level jurisdictions in China have dialed down their emergency response levels in recent weeks. Major cities like Beijing and Shanghai are growing busier as people increasingly venture outside or return to work.

So-called imported cases — people who enter the country after contracting the virus abroad — now comprise most new infections in China. Local governments in Hubei must also guard against a rebound in the caseload as increasing numbers of people travel and congregate, Tuesday’s notice said.

A number of local jurisdictions in Hubei have eased quarantine restrictions in recent days as the danger of infection has receded. Hanchuan, a city of 1 million people under the jurisdiction of the larger city of Xiaogan, allowed farming households to return to their fields last week.

Rural dwellers there set off firecrackers in celebration, said Hu Jiao, who returned to Hanchuan for the Lunar New Year holiday in January and finally returned to Shanghai, where she works, on Saturday. “The old folks in my family were laughing and crying at the same time,” she said.

Other people in Hubei greeted the easing of restrictions with similar relief. “I’m feeling great after more than 50 days in quarantine!” said Qiu Jing, a resident of the city of Chibi, which has a population of around 500,000.

Speaking to Caixin Global while traveling back to Shanghai, where he works at a global advertising agency, Qiu said he only gained permission to leave Chibi after obtaining an official document stating he had completed quarantine, another document proving he was in good health, a request from his employer asking him to return, and an electronic health code.

But the additional bureaucracy wasn’t enough to dampen Qiu’s spirits. “I just feel lucky the virus was controlled and really appreciate the efforts of those doctors and many frontline workers and volunteers who came to help us for free.”

For others, though, the coming respite from being cooped up indoors also provoked feelings of trepidation. “People around me are taking quite a cautious attitude toward this policy,” said Wang Bowen, a resident of Wuhan. “We think that even though the lockdown has been lifted, we must keep up protective measures until the situation is completely brought under control.”

Few people in Wuhan will use public transport or go to public places anytime soon, predicted the former confectioner, who is currently unemployed. “As for me, I’ll not be going to crowded spots and will look after myself until the epidemic has disappeared for good.”