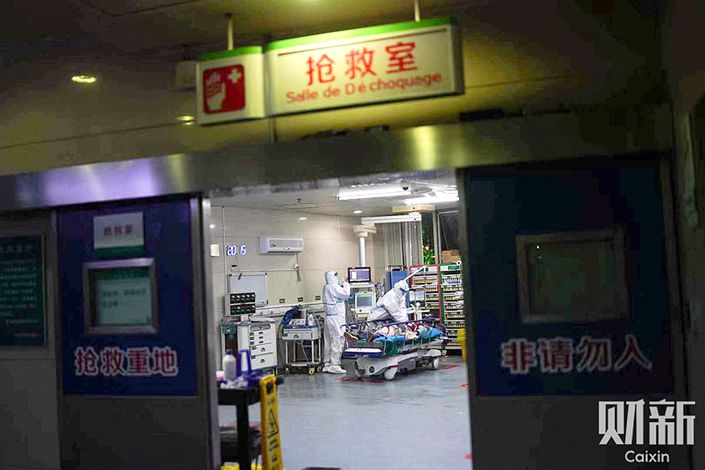 Last month, hospitals in the central Chinese city of Wuhan sounded the alarm over spiraling numbers of infections and deaths from a new kind of coronavirus.

Over the following weeks, authorities across the country dispatched medical teams to the epicenter of the outbreak to relieve the burden on Wuhan’s overcrowded, undersupplied hospitals.

Huang Xiaobo normally heads up the intensive care unit (ICU) of the Sichuan Provincial People’s Hospital in the southwestern city of Chengdu. But on Jan. 25 — the first day of the Lunar New Year — Huang was made the deputy director of a 30-person relief team from Sichuan.

When Huang arrived at the Red Cross Society Hospital in Wuhan, he was greeted by a scene of near-total chaos. Patients and their loved ones filled the wards and spilled out into the corridor. Medical staff, many of whom had contracted the virus themselves, were struggling to treat the sick and deal with a chronic shortage of equipment.

In a lengthy interview with Caixin, Huang described how his team helped save the hospital from the brink of collapse. His account, recorded on Feb. 5, provides a representative example of the struggles faced by medical staff on the frontlines of the epidemic. Huang’s words have been edited for brevity and clarity.

A scene of devastation

Yesterday marked 10 days since I brought the epidemic relief team to Wuhan. It was also the first day I managed to get some rest since my arrival.

We arrived in Wuhan in the early hours of Jan. 26 and began work at Red Cross the same afternoon. I had previous experience in rescue work during the 2008 Wenchuan earthquake, in which more than 87,000 people died. Even then, the hospitals didn’t feel nearly as chaotic as when I stepped into Red Cross.

Read More
In Depth: How Wuhan Lost Its Grip on Thousands of Suspected Coronavirus Cases

Red Cross is quite a small hospital, with a combined 400 doctors and nursing staff, and around 300 berths. Last month, the government commandeered the hospital as part of the first batch of emergency fever units, and the second batch of designated coronavirus treatment facilities. That meant the hospital was receiving up to 800 fever patients per day — and frankly, it couldn’t cope.

Suspected coronavirus patients were mixing freely with normal fever patients, contaminating the entire hospital. In the inpatient department, we found all the berths filled with patients, while the corridors were stuffed with people kept in for observation. The sick and the healthy were all crammed in together.

But the main problem was the widespread infection of medical staff, more than 30 of whom had already been hospitalized, while another 30 were in quarantine. That meant around a sixth of the hospital’s labor force wasn’t able to work, and everyone was worried they’d be the next to fall sick.

I realized that without emergency measures, the hospital could collapse. The same day, I advised local officials to shut the emergency department for three days while we determined the source of all our patients.

From Jan. 27 to Jan. 30, we screened patients for coronavirus infection, a task complicated by a shortage of diagnostic kits for nucleic acid tests (NATs). Only when I spoke to a visiting provincial government official on Jan. 28 did the situation ease somewhat. The following day, we finished initial NATs on more than 300 inpatients and moved all of those who tested positive to the second floor for isolation.

In a bid to halt the spread of infection within the hospital, we also separated the isolation ward from the rest of the facility, controlled how people moved between the two areas, and drew up plans for storage and disposal of medical waste. We sterilized the wards every day and installed air sterilizers in the corridors.

Finally, we simplified the process for handling the bodies of the deceased. Normally, the hospital requires doctors to test for a heartbeat before confirming the death of a patient. We’ve temporarily suspended that requirement because the bodies of the dead still carry the virus. For now, we rely on our doctors’ own judgment to determine whether someone has died.

At the moment, relatives of the deceased only need to present an identification card to confirm a death. Once the death certificate has been issued, we have people thoroughly disinfect the body before allowing the undertakers to remove them from the hospital. Sometimes, the undertakers are so busy that the dead lie in their hospital beds for several hours before someone comes for them.

A shortage of equipment

In more than 10 years of experience treating patients with severe illness, my work has never left me feeling more distressed than my time at Red Cross.

My role here includes reconfiguring the hospital’s intensive care unit. When my team arrived, the dozen or so ICU staff was extremely depleted. One of the four doctors had been confirmed to have the coronavirus, two cases had been discovered among the nurses, and there were two or three other cases among the other staff.

We closed down the original ICU and merged it with the neighboring respiratory department, expanding the number of berths from nine to 18. We started receiving patients again on Jan. 30; by the second day, all the beds were full, and we’d had to add several more observation berths in the corridor.

Red Cross has far from enough resources to save patients at death’s door. As a doctor, when you see a patient’s breathing start to decline, you’re supposed to first administer high-flow oxygen inhalation, then a noninvasive ventilator, then intubation, and finally something called extracorporeal membrane oxygenation (ECMO) — pumping the patient’s blood through an artificial lung machine. Red Cross only has the equipment for the first two steps.

In the last few days, I’ve pleaded over the phone with people in Wuhan, as well as with my medical friends back in Chengdu and Chongqing, but nobody is able to get us an ECMO machine. The Wuhan city health commission has approved our application for one, but for now we’re still on standby. There are simply too few machines, so it’s difficult to assign one to our little hospital.

Since I took over the ICU, five patients have died. Three of them might have been saved, or at least might have lived a while longer, if we had been able to administer ECMO. They all wanted badly to survive, gripping our doctors’ hands and imploring them not to abandon them. But without the right equipment, we could only watch helplessly as the life drained out of them.

We’ve considered transferring critical patients to another hospital with better resources, but we need the city health commission’s permission to do that, and the formalities involved are long and troublesome. Plus, other hospitals also have shortages of beds, and transferring patients during intubation can easily lead to problems. So we have to do our best to save them ourselves.

Two patients in particular have affected me deeply. One lived, one died.

The one who lived was the mother of an 11-year-old kid. Every day, when I checked on the observation ward, the woman was lying there with her husband loyally by her side. Her condition wasn’t great: Although she remained lucid, her breathing was deteriorating and she was fighting for oxygen. On Jan. 30, I transferred her to the ICU.

Her husband was with her the whole time, telling her to keep fighting for the sake of their child. I could see that she was struggling hard to stay alive. Once we got her to the ICU, we put her on a noninvasive ventilator, and her oxygen levels started rising. Her condition has gradually stabilized, and she can now eat again.

The patient who died was 62 years old. On his first day in the ICU, his condition didn’t seem too bad: His oxygen levels were OK and he could sit up in bed. When I checked on him that evening, I told him: “You’re doing pretty well. Keep on fighting.”

But when I checked on him again the following morning, his blood oxygen levels had plummeted. I put him on a noninvasive ventilator, but it didn’t work. I realized that without ECMO, he probably wouldn’t make it. I frantically called around, asking other hospitals if I could borrow an ECMO machine. I couldn’t get ahold of one, and the patient passed away yesterday morning.

At the moment, we can’t do much for patients in critical condition. We know of no medicines that can stop the virus, and so we can only try to prolong our patients’ lives and wait for the illness to run its course.

In the end, this is something that patients have to fight through largely by themselves. Those who stay optimistic, who retain the will to live, sometimes pull themselves out of very serious situations. But those who can’t keep up the fight will likely die.

I usually leave my hotel at around 7:30 a.m. and make my way to the hospital for a team leaders’ meeting. There, I learn the hospital’s latest status and the problems it’s facing, and suggest possible solutions in much the same way I would at my hospital in Sichuan.

I start my rounds in the ICU at around 10 a.m. The most important part of the job is keeping spirits high: encouraging patients not to give up, to keep fighting until they win their battle with the disease.

My patients have a strong will to live, especially the older ones — they fear loneliness and death, and want companionship. One elderly guy in bed No. 13 is fine when there’s a doctor or nurse by his side, but as soon as they go outside to do something else, he starts grumbling and calling out until they come back.

I usually leave the hospital at around 7 p.m., but there’s still a whole pile of things to do when I get back to the hotel. As the Sichuan medical team’s second-in-command, I have to join executive committee meetings.

I also frequently take calls from distressed younger doctors who want to talk things through. Recently, I received a call from a doctor and a nurse, both in tears after losing a patient to the virus. They were questioning whether they’d done enough to save them, or whether they’d made mistakes.

I can only tell them that the conditions are what they are, and there’s not much we can do beyond trying everything we can to help. As doctors, that’s our greatest obligation.