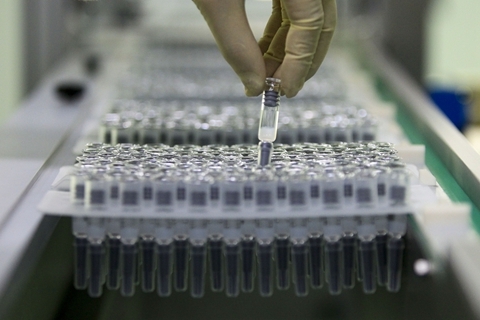 China’s medical diagnostics companies may be getting a rare boost thanks to their head start in creating Covid-19 test kits, the demand for which is surging globally amid an escalating pandemic. It’s an edge that could lead the fledgling industry to grow by billions of dollars in 2020.

According to the China Society for Drug Regulation, the country’s in vitro diagnostics (IVD) industry, or companies that make tests that use tissue or bodily fluid samples to diagnose medical conditions, was worth 60.4 billion yuan ($8.52 billion) in 2018. With growth of 18.43% that year, China’s industry was already one of the fastest-expanding in the world.

This figure is projected to grow to 80 billion yuan in 2020, according to a March 6 report by Times Sino Biz Business School.

Already, Chinese companies numbering in the dozens are pivoting to meet overseas demand as the coronavirus epidemic at home appears to be waning while foreign governments are scrambling get a handle on their own outbreaks.

Since last week, at least 64 Chinese companies that make IVD tests were exporting Covid-19 kits to the European Union. Chinese test kits were also being sent to the U.S., Southeast Asia, the Middle East and Africa. According to a director of overseas sales at an IVD company who asked not to be named, major foreign biotech companies underestimated the risks of the disease and dragged their heels on manufacturing tests.

But while Chinese companies may have found a rare window of opportunity, they are a ways behind the competition.

According to a December report by analyst firm First Capital, more than 60% of the IVD market belongs to Europe, North America and Japan, while the dominant foreign companies control more than 50% of the global market. What’s more, the largest companies in the world, namely Switzerland’s Roche, Germany’s Siemens Healthineers AG, and the U.S.’ Danaher Corp., Abbott Laboratories and Thermo Fisher Scientific Inc. control the supply chains and core technologies of the global IVD industry.

In comparison, China’s industry, consisting of more than a hundred manufacturers, is still emergent.

That’s not to say that all Chinese companies are the same.

Guangzhou Wondfo Biotech Co. Ltd., whose Covid-19 test kits received the European Economic Area’s CE marking for meeting its health and safety standards earlier this month, has relatively mature overseas sales channels, according to a report by Huaxi Securities Co. Ltd. According to the analysts, it also has operations in the U.S., the Middle East, Asia and Africa, and will have a leg up on exporting Covid-19-related products.

Other companies are teaming up. Chinese Biotech Services Holdings Ltd.’s subsidiary Asia Molecular Diagnosis Laboratory Ltd. partnered on March 16 with China’s genetics heavyweight BGI Group’s Hong Kong subsidiary on a distribution agreement for its Covid-19 test kits. Under the agreement, BGI appointed Asia Molecular as its strategic distributor in the EU, the U.S., parts of Asia, Australia and Canada for three years.

Among unconventional routes, Shanghai Kehua Bio-Engineering Co. Ltd. Chair Ding Wei said that his company had participated in the World Health Organization’s (WHO) HIV testing project, and was added to the WHO’s list of suppliers. He said that the company has relatively complete research and development, production and sales arrangements that should give it a boost in connecting with foreign governments.

Beyond sales channels, there are also questions of reliability and cost. BGI says the latter depends on each country’s market.

Based on publicly available information, the prices of Chinese products tend to be lower. The overseas sales director said that his company has set overseas prices close to what it charges in China in hopes of a quick overseas introduction and broadening of overseas sales channels. Yet some industry insiders say that they have seen products that are more expensive as well.

Meanwhile, in the absence of a universal measure of quality, Chinese tests are seeing mixed reception. Already reports are circulating (link in Spanish) of faulty Chinese kits, purchased by the hundreds of thousands, that could shake confidence in Chinese manufacturers.

According to Ding, product quality and guarantees, including by meeting performance assessment requirements of other countries, and having adequate sales channels, as well as access to upstream and downstream resources, such as antigen production capacity for antibody-based tests, will be crucial to competing overseas.

And despite China’s early start, this competition could be fierce. South Korea, which has had a large outbreak of its own, has swiftly approved the manufacturing of several kinds of test kits and began to test en masse. Since March 17, with new cases beginning to ebb, the country also began to export its products.

According to Seoul, that very day, some 17 countries had requested its supplies.

“When it comes to Covid-19 test kits, we don’t have to be that humble,” Ding said. “But to really stand on our feet overseas, we have to keep improving quality and research and development capabilities, and set up superior channels and resources, strengthen brand influence and more.”