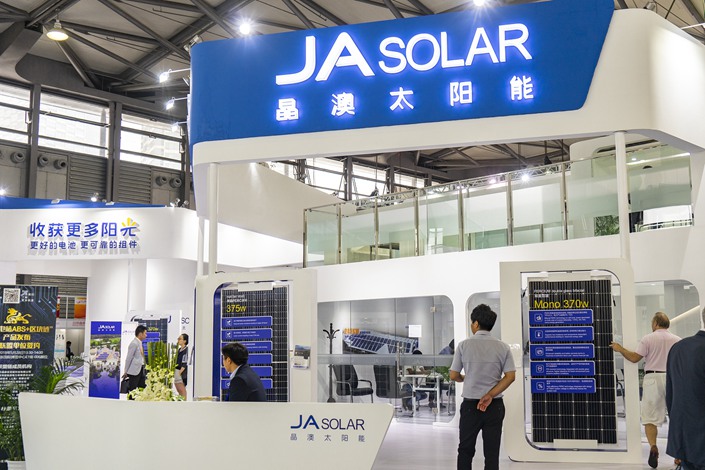 Following a bumper year of double-digit growth in 2019, the solar panel sector could see a slowdown this year that could even include an unprecedented sales contraction brought on by fallout from the Covid-19 pandemic, analysts said.

That picture was reflected in the latest financial report of JA Solar Technology Co. Ltd., a top player that posted healthy profit growth in its 2019 full-year report released late on Sunday (link in Chinese). But even as it announced the upbeat financials, it warned of major risks this year due to the novel coronavirus that is disrupting global supply chains and has brought business in many places to a near-standstill.

JA Solar said its profit for 2019 rose 87% to 1.3 billion yuan ($183 million), while revenue rose by a more modest 7.7% to 21.2 billion yuan. The company benefitted in part from its high reliance on exports, which make up more than 70% of sales, as solar energy becomes commercially competitive with fossil fuel energy. JA Solar’s exports of its core solar modules rose 55% for the year from 2018 levels, according to its report.

But the company was far less certain about the current year due to the worldwide Covid-19 epidemic. In its report, it cited “acts of God” as a major risk in 2020, without providing further specifics.

Following the outbreak, UBS lowered its forecast for global solar installations this year to about 130 gigawatts (GW) from a previous 150 GW, which would still represent growth from last year’s 115 GW. BloombergNEF was more bearish, lowering its 2020 forecast earlier this month to between 108 GW and 143 GW of new installations from a previous forecast of 121 GW to 154 GW.

“This could be the first time in 40 years we see new installations go down,” said BloombergNEF analyst Wang Xiaoting.

UBS analyst Alex Liu said that while some solar farm developers were being forced to delay construction due to logistical issues, most are still moving ahead with their original plans for the year. “Based on our channel checks with overseas developers of solar farms, (they are still reviewing the impact and haven’t significantly) reduced their guidance for new installations this year, especially developers in Australia, Europe and the U.S. But they all mentioned construction could be delayed a bit,” he said.

He added that the latest UBS forecast assumes that the outbreak will end in the next few months. “If the outbreak continues to be serious, lasts to July or even August, maybe we will further reduce our estimates about demand,” he said.