In Depth: The Challenges of Treating Covid-19’s Tiniest Victims 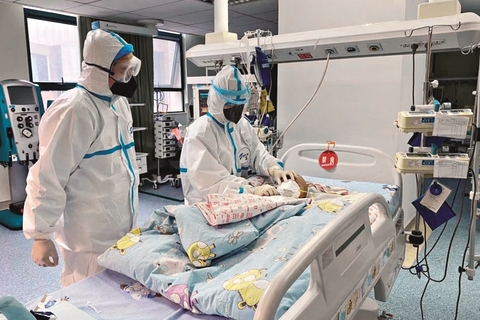 At 3 a.m. Feb. 2, pediatrician Cui Yuxia at Guizhou People’s Hospital, got a call from emergency responders. A 55-day-old infant girl had tested positive for the Covid-19 virus. Minutes later, the baby girl wrapped in orange swaddle was sent to the hospital, becoming the youngest coronavirus patient in the southwestern province.

The case was one of thousands that have presented doctors like Cui with special challenges. Less is known about the effects of the Covid-19 virus on children, especially infants, than has been learned in the past few months about its workings in adults. While studies suggest that childhood cases generally tend to be less severe than adult cases, infants may have higher rates of severe illness than older children, based on a study of more than 2,000 pediatric cases in Wuhan, the epicenter of the pandemic

As infants younger than 1 year old can’t talk or cooperate with medics, diagnosing, caring for and treating them are particularly difficult. Chinese pediatricians who have treated infant Covid-19 patients said there was initially no guidance on how to care for them and doctors had to “cross the river by feeling the stones.”

China’s early cases provide valuable experience for the rest of world now struggling with mounting challenges. With the outbreak raging globally, cases involving pregnant women and infants have been reported in Italy and the U.K., where doctors are eager to discuss the experiences of their Chinese peers. Pediatricians and obstetricians at Wuhan Children’s Hospital recently held conference calls with doctors in more than 20 hospitals from Australia, New Zealand, the U.K., the U.S. and Canada to discuss treatment plans.

The study of 2,000 pediatric cases in Wuhan appeared in the journal Pediatrics published by the American Academy of Pediatrics. A team led by Tong Shilu at the Children’s Medical Center of Shanghai Jiao Tong University School of Medicine found that children at all ages appeared susceptible to Covid-19, but young children, particularly infants, were more vulnerable and became seriously ill.

Wuhan Children’s Hospital is the only designated hospital for children confirmed with or suspected of Covid-19 infection. By early March, the hospital accepted more than 50 infant patients, of whom four were treated at intensive care units, a hospital staffer told Caixin.

Unlike adult patients, infants showed more “cunning” symptoms, which made it more difficult to identify. On Jan. 29, a 17-day-old newborn experienced vomiting and diarrhea. The child tested positive for Covid-19 Feb. 4 at Wuhan Children’s Hospital. In the process of treatment, the infant had no typical symptoms such as fever or trouble breathing.

How do infants get infected?

Close contact with infected family members or caregivers was the main source of infant infection, the researchers found. The 17-day-old newborn was infected by the nanny, who later also tested positive.

One question is whether newborns could contract the coronavirus in the womb or during labor. One newborn was diagnosed with the virus just 30 hours after birth. The baby’s mother tested positive before giving birth. It is still unclear whether the virus can infect a fetus. Most data suggest babies do not catch the virus before birth, but two studies published in the Journal of the American Medical Association suggest it might be possible.

A study of nine confirmed cases of pregnant women found that six patients tested negative for the virus in their amniotic fluid, cord blood, newborn throat swabs and breast milk samples. But the authors emphasized that the study involved a limited sample size and more clinical data is needed to confirm any conclusion. In another study, a newborn to a mother with Covid-19 had elevated antibodies two hours after birth, while such antibodies do not normally appear until three to seven days after infection.

Several pediatricians said they think that with precautions during labor and quarantine after birth, newborns could be effectively prevented from contracting the virus from infected mothers. Zhongnan Hospital of Wuhan University, the designated hospital for accepting pregnant Covid-19 patients, had more than 60 confirmed and suspected pregnancy cases by Feb. 22, and none of the newborns tested positive.

A case study published in Translational Pediatrics by a team at Maternal and Child Health Hospital of Hubei Province Perinatal found that even though transmission of Covid-19 from a pregnant woman to the fetus is yet to be confirmed, researchers did find that perinatal infection may cause problems such as fetal distress, premature labor, respiratory distress, low blood platelet levels accompanied by abnormal liver function, and even death. Once such newborns are infected with the virus, they are at higher risk of becoming severely ill, researchers said.

Once diagnosed, the first question is how to treat infants. Under the Covid-19 treatment guidelines issued by China’s National Health Commission, adult patients can be treated using antiviral, antibacterial and anti-inflammatory drugs, such as the HIV drugs lopinavir/ritonavir. But experts quickly ruled out the use of such pharmaceuticals in children.

“Lopinavir/ritonavir was never recommended for use in children because they have a lot of side effects and can cause adverse reactions to the digestive system,” said Cui at Guizhou People’s Hospital. Abidor, a broad-spectrum antiviral drug with immune-enhancing effects commonly used for adults, was also rejected because of lack of clinical data in children.

As in adults, children with severe infection may exhibit significant difficulty breathing, so oxygen treatment is a priority. The four methods commonly used are nasal high-flow oxygen therapy, noninvasive ventilators, intubation, and as a last resort, extracorporeal membrane oxygenation, known as ECMO, in which a patient’s blood in pumped through a machine that adds oxygen when the lungs aren’t working properly.

If one method doesn’t work, it must quickly be replaced with the next stronger one to avoid sustained hypoxia. But as infants are so small and fragile, choosing which method to use can bring unexpected risks to both the patients and the medics.

Existing cases show that infected infants often have varying degrees of damage to the heart or liver and may develop septic shock, excessive acid in the body, and coagulation dysfunction, all posing challenges for doctors’ judgment.

In the case of Cui’s 55-day-old patient in Guizhou, she experienced heart and liver damage. On the fourth day in the hospital, she started coughing and had increased mucus, decreased arterial oxygen pressure, elevated troponin, and increased heart rate, all signs her case was becoming severe.

Cui’s team quickly decided to use nasal oxygen supply and remove the phlegm. Fortunately, her condition stabilized and she was well enough to be discharged Feb. 15.

One controversial treatment option involves corticosteroids, a class of steroid hormones that were widely used in previous outbreaks of Middle East respiratory syndrome (MERS) and severe acute respiratory syndrome (SARS). While these drugs showed effectiveness in treating severe Covid-19 patients, some who recovered after corticosteroid treatment had avascular necrosis, or the death of bone tissue from a lack of blood supply. Current guidance from the World Health Organization advises against the use of corticosteroids in Covid-19 cases.

For severe pediatric patients, several treatment guidelines issued in China suggest that corticosteroids can be used for three to five days in limited doses, depending on the degree of inflammation and difficulty breathing. Some pediatricians told Caixin that the timing of using such medication must be strictly controlled.

“Try not to use them until you have to,” one doctor said.

As the pandemic seems to be coming under relative control in China with no new local infections reported for about a week except those from abroad, pediatric cases are also easing. Wuhan, the capital of central Hubei province, reported no new infections for a seventh straight day.

As of March 8, Wuhan Children’s Hospital treated 683 children including confirmed and suspected cases. Of those, 419 have been discharged. Staff at the hospital told Caixin that 32 newborns with Covid-19 were cured, and four infants in critical condition now no longer need ventilators.

Another children’s hospital in Henan province said five confirmed and 19 suspected pediatric patients were all discharged by March 6, including an infant boy who was confirmed five days after birth and had been in critical condition. Two days after the infant girl Cui was treated and discharged Feb. 15, her hospital also reported zero childhood patents.

Data on pediatric Covid-19 patients is still scarce. Chinese pediatricians and researchers should be encouraged to publish case reports and clinical studies in a timely way to help pediatricians around the world better cope with the outbreak, one medical expert said.