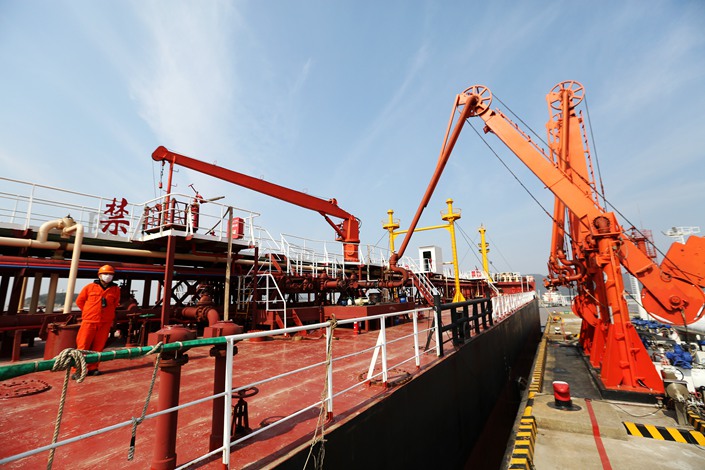 Zhejiang Petroleum & Chemical Co. Ltd. is set to become the first private Chinese oil company in four years to get a nod from the state to export refined petroleum products.

China’s cabinet on Tuesday effectively granted the company permission to begin exporting, a statement posted to its website shows. The document did not name the company, but gave approval to relevant companies operating within the Zhejiang Pilot Free Trade Zone, where Zhejiang Petroleum and Chemical Co.’s mega refinery and petrochemical complex is based. It did not set an exact export quota.

The news comes as the Chinese government pursues the twin goals of making room in its domestic stores to buy more crude at current bargain rates, and easing oversupply in its bloated refinery sector.

“Opening the export sector (to private companies) should be carried out as soon as possible,” said a researcher who works for a major state-owned oil giant, who Caixin granted anonymity so he could speak candidly. “Refineries are going to process more oil as prices remain low, which requires massive exports (to get rid of stockpiles).”

Of the 436 million tons of crude China refined last year only about 384 million were used, according to data from the CNPC Economics & Technology Research Institute. Even with a large increase in exports of some 34%, export volume accounted for just 12.5% of actual output, or 54.66 million tons.

In December, the State Council began to test the waters again with a policy that clearly stated private refiners would be eligible to export. Zhejiang Petroleum is the first beneficiary.

Located on an island off the coastal city of Zhoushan in the eponymous eastern province, Zhejiang Petroleum & Chemical Co. has a current refining capacity of 20 million tons, and plans to double that under an ongoing project. That is expected to add 8.34 million tons per year to its current capacity of 8.36 million, according to data from commodities prices provider JLC Network Technology.

The move highlights China’s ongoing struggle with oversupply in its oil refining market. In the first half of 2019, the average profit from processing a ton of crude oil in China fell by 32% year-on-year to 129 yuan ($18.41), the lowest in five years, according to data from the China Petroleum and Chemical Industry Federation.

Saudi Aramco, the world's largest oil and gas company, pledged to buy a 9% stake in Zhejiang Petrochemical in 2018 in a deal that ensured it would be the Zhoushan project's main supplier. The refinery project is part of Aramco's own efforts to shift its China business downstream.