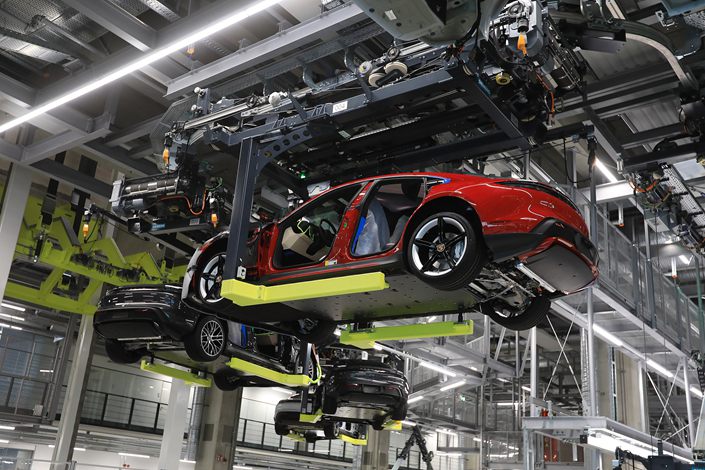 A Porsche Taycan gets lifted at the Porsche AG factory in Stuttgart, Germany, on March 5. Photo: VCG

The global coronavirus pandemic will “inevitably” hit automakers in China, an official has warned, as China’s industry emerges from the domestic epidemic amid disruption of international supply chains.

Liu’s warning comes as the coronavirus ravages Europe and the U.S., forcing car-part companies to reduce production or shut down their factories entirely to comply with quarantine policies.

The latest such shutdown has been Germany’s Continental, which announced Wednesday that 40% of its nearly 250 production sites worldwide had been temporarily shuttered. The company, which is one of the world’s biggest makers of car parts, also announced that half of its 60,000 staff in Germany had been furloughed. Continental’s announcements followed similar moves by other car-part companies, including Germany’s Bosch and France’s Faurecia.

China’s automakers rely heavily on global supply chains, importing many key components. According to a recent report by Pacific Securities Co. Ltd., such parts include gearboxes and the control unit for fuel injection systems. Nearly all of these components are sourced from countries outside China, with 65% coming from Germany, the report said.

In the briefing, Liu warned that shortages of any one key component due to the coronavirus could affect China’s entire auto industry chain. The complexity of auto supply chains means automakers find it difficult to switch suppliers once they have establish a relationship, a challenge that will only be compounded by Covid-19 shutdowns. Setting up partnerships with suppliers is a multi-step process that requires a long time to move through various stages, from product development to testing, according to the China Automotive Technology and Research Center.

Automakers in China had already taken some precautionary measures before the outbreak became a full-blown pandemic, said Jiang Yongwei, chairman of Faurecia China. That means it is “unlikely” automakers in China will face shortage of car parts in the short term, Jiang said. However, he cautioned that as the pandemic continues, risks for Chinese automakers will grow.

The coronavirus epidemic has hit the Chinese auto industry hard, exacerbating a broader downturn over the past two years. In February, car sales in the world’s biggest auto market nosedived 79% to 310,000 vehicles, according to the China Association of Automobile Manufacturers, falling for the 20th month in a row.