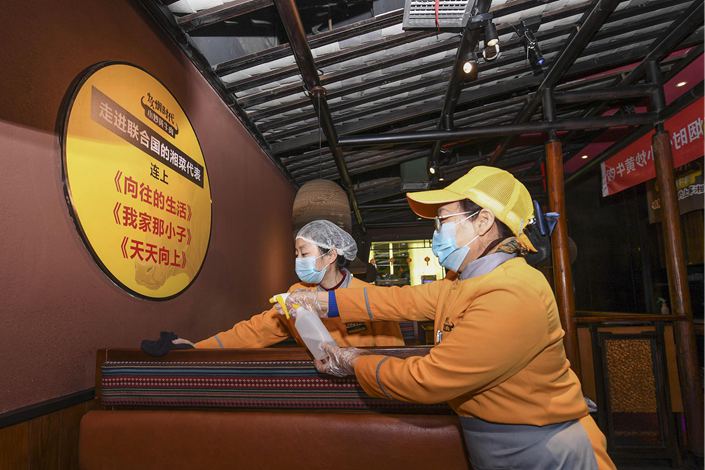 China’s services activity contracted at a slower pace in March than the previous month as the coronavirus outbreak eased, a Caixin-sponsored survey showed Friday.

The Caixin China General Services Business Activity Index (PMI), which gives an independent snapshot of operating conditions in the services sector, rose to 43 in March from a record low of 26.5 in the previous month. The March reading marked the second lowest level since the survey began in 2005. A number above 50 indicates an expansion in activity, while a figure below that points to a contraction.

Since the virus broke out in December, the Chinese government has taken unprecedented measures to contain the epidemic, restricting transportation and the movement of people in many cities across the country. Many services enterprises were forced to suspend operations, leading to many suffering cash crunches or going bankrupt.

Both total new business and new export business in the services sector further declined in March from the previous month, though the rates of contraction were much slower than in February, which saw the steepest paces on record. The rapid spread of the pandemic outside China has put more pressure on overseas demand for services, Zhong said.

Employment across the services sector dropped at the quickest pace on record in March. The survey said some employees had left voluntarily, while the others had left as their employers cut costs amid the outbreak.

The measure for outstanding business at services enterprises plunged into contractionary territory in March from a record high level in February due to the slump in new work. The rate of reduction in backlogs of work last month was the steepest since September 2015.

The gauge of input costs for services companies bounced back to positive territory last month after it dropped into contractionary territory in February, due in part to rising costs for antivirus equipment for staff, the survey said. In the meantime, services firms cut their selling prices at the steepest rate since April 2009.

The gauge for service companies’ business expectations, which indicates how optimistic or pessimistic they are about the business outlook for the coming 12 months, picked up from February’s historic low. Both the March and February readings remained in expansionary territory.

“The recovery of economic activity remained limited in March, although the domestic epidemic was contained,” said Zhong. “The country’s first-quarter GDP is likely to have dropped significantly. Such a situation requires policymakers to cut this year’s GDP growth target and step up countercyclical efforts to support areas like consumption and infrastructure, particularly given the accelerated contraction in the service sector job market.”