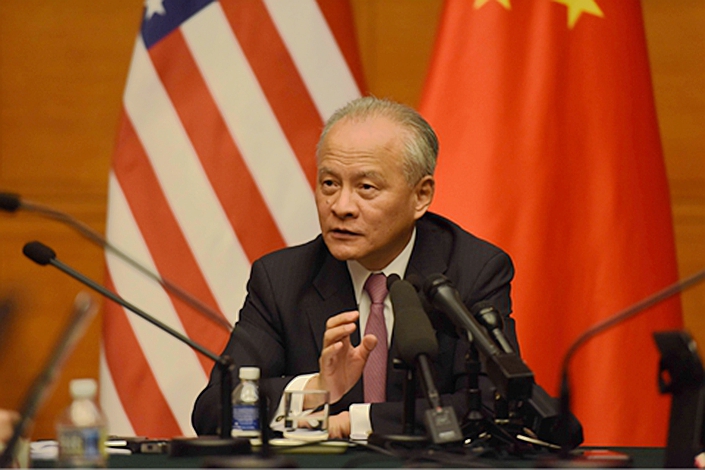 China’s ambassador to the United States has called on the two countries to avoid blaming each other for the novel coronavirus outbreak and instead lead international efforts to fight the Covid-19 pandemic that has so far infected over 1.3 million people and killed more than 74,000 globally.

In an opinion piece published Sunday in The New York Times, Ambassador Cui Tiankai acknowledged that “there has been unpleasant talk between our nations about this disease,” but said “this is not the time for finger-pointing.”

“At a time when solidarity is essential, we need to keep cool heads and clearly say ‘no’ to the folly of fanning racism and xenophobia, and to scapegoating other countries or races,” Cui said.

“Such acrimony will not only undercut cooperation between our nations, but also sow seeds of suspicion and confrontation that could put our peoples — and even the world — in grave danger from this runaway virus and the economic fallout it is causing,” he continued.

Cui’s comments came after Chinese and American officials traded barbs over the origin of the virus, which was first detected in the central Chinese city of Wuhan.

Last month, Zhao Lijian, a Chinese foreign ministry spokesperson, took to Twitter to stoke the unfounded theory that the virus actually originated in an American military laboratory, a claim Cui has repeatedly rejected.

“There are people who are saying that these virus are coming from some … military lab, not of China, maybe in the United States. How can we believe all these crazy things?” Cui said during a Feb. 9 interview with CBS.

In addition, U.S. President Donald Trump previously referred to the pathogen as the “Chinese virus,” a term that has angered Beijing and drawn accusations of racism.

Striking a conciliatory tone in the article, Cui, who has been China’s top official in the U.S. since 2013, said the two countries “need to lead international efforts in collaborative research into treatments and vaccines, and explore the sharing of pharmaceutical technologies among nations.”

China is sending test kits, protective masks, and medical supplies to overwhelmed American hospitals and sharing updates about the disease “in a responsible manner,” Cui said. Embattled Chinese technology company Huawei, which Washington has sanctioned over espionage fears, has donated “tens of thousands” of personal protective items to New York and Washington, D.C., he added.

Additionally, Cui called on China and the U.S. to strengthen coordination of macroeconomic policy to stabilize markets rocked by the pandemic, safeguard economic growth and people’s livelihoods, and maintain the stability and security of worldwide supply chains.

China reported no daily virus-related deaths for the first time since January on Tuesday. The country has officially logged more than 83,000 Covid-19 cases and 3,340 deaths, according to the National Health Commission. The U.S. has so far recorded more than 368,000 Covid-19 cases — more than any other country’s official count — as well as nearly 11,000 deaths, according to a tally by Johns Hopkins University.