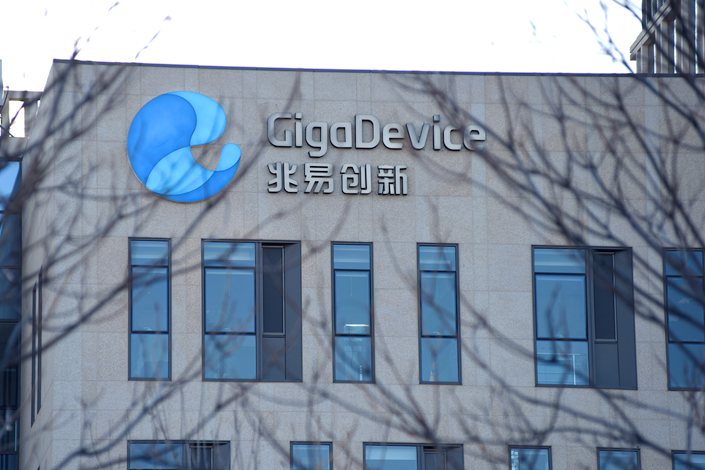 GigaDevice’s drive into memory also comes as China tries to build up its own chip sector to lower its reliance on dominant players, mostly based in the U.S., Europe, Japan and South Korea. That reliance came into focus last year when the U.S. banned Huawei Technologies from buying many American-made parts, including telecom chips, dealing a major blow to the local tech giant.

GigaDevice said it plans to raise up to 4.32 billion yuan ($611 million) through a private placement of new shares to fund the move into DRAM, one of two major types of memory chips that power smartphones, PCs and other computing devices. It said the securities regulator approved the new share issue last Friday, according to its Tuesday announcement (link in Chinese) to the Shanghai Stock Exchange.

Most of the funds raised would be used to develop new DRAM chips and eventually produce them, GigaDevice said. It added the private placement would go to up to 35 investors, including fund managers, brokerages and other financial institutions. It said the number of new shares would be equal to up to 20% of the company’s total count.

GigaDevice first announced its intent in March, saying its plan would cost about 4 billion yuan, with 3.3 billion yuan of that to be used on DRAM development and mass production.

Most of the world’s DRAM and NAND, the other major kind of memory, are currently produced by South Korea’s Samsung and SK Hynix, as well as U.S. producer Micron Technology, which collectively control 90% of the global market. All three global leaders are now producing chips in the 12 to 19 nanometer (nm) range, while GigaDevice aims to develop its first chips in the 17 to 19 nm space. The smaller the chip’s specification, the more circuits and memory capacity that can be packed onto its surface. GigaDevice intends to wrap up its design and production planning this year, and complete customer validation and start mass production next year.

In addition to its own DRAM plans, GigaDevice is also an investor in ChangXin Memory Technologies Inc., one of China’s other major companies exploring DRAM production. ChangXin is already producing DRAM chips and has invested 15 billion yuan in the campaign, with plans to build out its production in three stages.

A third player, Tsinghua Unigroup, has also been putting resources into DRAM development. The company announced the establishment of a DRAM working group last June, and later said it would set up its production base for the product in the southwestern city of Chongqing. It said it planned to start construction on its facility at the end of last year and start producing chips in 2021.

But simply wanting to produce such high-tech chips may not be enough for China to quickly become a player, since such production requires sophisticated proprietary technology that China now largely lacks, observers have noted. Even before the current Covid-19 outbreak shut down much of China for more than a month, aspiring chipmakers were finding that their pockets were simply not deep enough to build a competitive chipmaking industry from scratch, despite stretching their budgets to the breaking point.