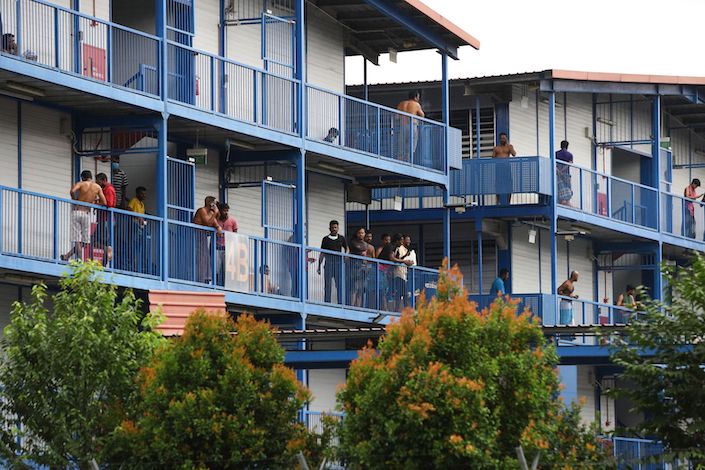 Foreign workers at the S11 Dormitory at Punggol on April 6. Photo: Bloomberg

(Bloomberg) — Tightly packed dormitories housing thousands of foreign workers have emerged as one of Singapore’s biggest challenges in its fight to contain the spread of the coronavirus.

The city-state reported its highest daily increase of infections Thursday, and more than 200 of the 287 new cases were linked to dormitories that house mainly low-wage foreign workers in construction and other sectors. Those groups now account for about a quarter of the country’s 1,910 cases.

Authorities have moved swiftly to isolate the clusters. Two dormitories that together house almost 20,000 people were designated Sunday by the Ministry of Manpower as “isolation areas” after new, linked virus cases emerged. Two more dormitories were similarly designated this week. Residents were ordered to stay in their shared rooms for two weeks but would still receive wages as well as deliveries of food and other essentials.

“It is honestly a difficult situation,” said Leong Hoe Nam, an infectious diseases physician at Singapore’s Mount Elizabeth Hospital. He drew comparisons to cruise ships like the Diamond Princess, where 700 of its 3,700 passengers were infected with Covid-19. “This is going to be a big mess.”

Singapore has been championed by health officials for its methodical virus response since the outbreak began. The move to quarantine potentially exposed workers living in close proximity raised questions about whether the conditions will allow for adequate social distancing — one of the key strategies used around the world to contain the outbreak’s spread.

“To try and sort this out, they need to remain in the rooms for weeks with no interactions,” Leong said. Singapore will have to also navigate language barriers and cultural differences among the workers, he said.

Adequate social distancing is already a challenge for those who don’t live in worker dorms. The government gave out more than 7,000 warnings to people who didn’t observe rules on the first day of a month-long so-called “circuit breaker” in which schools and most workplaces were closed. The prime minister warned Thursday that people are still not doing enough to stay apart from one other.

Foreigners make up about 38% of Singapore’s workforce, including foreign domestic workers, according to government figures through the end of last year. In the construction industry, three of every four workers is foreign, and foreigners account for about half of Singapore’s manufacturing workforce and 30% of service workers.

There are more than 200,000 migrants from across Asia who live in 43 dormitories in Singapore, Minister of Manpower Josephine Teo wrote Monday on Facebook. There is “no question” standards in dormitories should be raised, she said. Singapore charities that support migrant workers say they have seen 10 or more people share a single room.

With the coronavirus ravaging much of the planet, crowded spaces like these “pose transmission risks for everyone,” the World Health Organization said.

“When people are in quarantine, physical distancing becomes even more challenging,” a WHO spokesman wrote by email. “In such conditions, it’s especially important to follow guidance on regular hand washing, respiratory etiquette and other practices to keep people healthy and prevent disease spread.”

Singapore is providing on-site support, including food and essential supplies while preventive measures are being put in place in the dormitories, the spokesman wrote.

The government has closed nonessential amenities such as gyms and libraries, prevented inter-mingling between blocks, and staggered meal and recreation times. It also established basic health care facilities at two of the dormitories, while the authorities are seeking to whittle down the number of residents in affected blocks. Some healthy foreign workers operating in essential services have been moved to vacant public housing apartments.

Meanwhile, Singapore has also deployed army doctors, military medical experts and medics at the dormitories to take care of foreign workers who are unwell or infected, according to a Facebook post by Minister for Defense Ng Eng Hen.

Separately, in Kuala Lumpur, the Malaysia government Tuesday imposed an “enhanced movement control order” on two apartment facilities in that house 6,000 residents after 15 people tested positive for the virus, Defense Minister Ismail Sabri Yaakob said Wednesday. Of the residents, 97% are from abroad, mostly India, Pakistan and Bangladesh, he said.

With 38 confirmed cases currently, the purpose-built workers accommodation Westlite Toh Guan was among the two facilities to be isolated in Singapore Sunday. There, a total of 6,800 residents are spread across 687 apartment units with an average of eight to 10 occupants per room, according to emails with Centurion Corp., which owns the buildings. The units include bathrooms, a kitchen, showers and dining space.

As in the other isolated dormitories, residents there have received care packs consisting of masks, thermometers and hand sanitizer, and “after some initial hitches” meals are being delivered in a timely fashion, according to a government statement Tuesday.

Ah Hlaing, a Burmese caregiver at a daycare center for the elderly who shares an apartment at the dormitory with about 10 people, said after initially being upset over the new rules, she acknowledges they are necessary.

She was “upset because we can’t go out and have to stay in the room,” Ah said. She has access to the essentials including food and sanitary products, she said. “We have to accept now that at this time, we can’t do anything.”

Some rights groups have expressed concern the government is not doing enough.

“The key vulnerability, crowding, is not really being addressed with sufficient determination,” said Alex Wu, vice president at Transient Workers Count Too, a registered charity that helps low-wage migrant workers. “Infectious diseases thrive through human proximity. In fact, requiring workers to stay in their rooms except for occasional periods will intensify contact, not reduce it.”