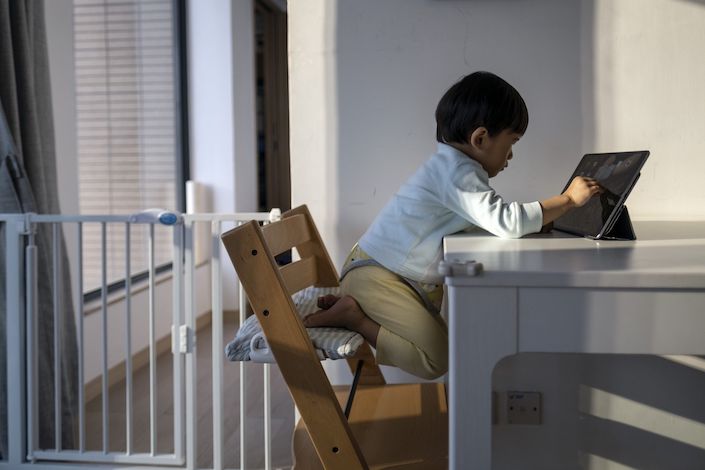 Private international schools in China are facing refund requests from parents unsatisfied with online learning as many schools remain closed amid the coronavirus pandemic.

Parents of students at the Sanlitun campus of the British School of Beijing recently were told they must pay tuition of as much as 70,000 yuan ($10,000) even though only online classes are being provided. Some parents complained that the e-learning on offer doesn’t justify the cost.

“I can teach my child math and Chinese myself,” a parent of a first grader told Caixin. “With the expensive tuition, the education provided by the school can’t meet our expectations.” Choosing a private international school is more about immersive education than simply learning math and Chinese, the parent said.

China’s Ministry of Education last week issued a notice forbidding schools to charge tuition in advance. But administrators at many private schools say that advance payment is the only way to keep their operations going. Revenue loss during the epidemic has already put some private kindergartens at risk of closure.

“Our teachers are working hard every day, and we have to make sure they get paid,” British School of Beijing, Sanlitun’s Principal John Brett said in a message sent to parents. The principal stressed that tuition is the school’s only revenue source. The school still hasn’t posted a reopening date.

The British School of Beijing, Sanlitun, a private school from kindergarten to sixth grade, is part of Hong Kong-based company Nord Anglia Education. The school accepts only accepts students with foreign citizenship or permanent residence, according to a parent. The Sanlitun school and Nord Anglia Education didn’t respond to Caixin’s requests for comment.

Since the Lunar New Year break from late January to early February, the school has been closed because of the Covid-19 pandemic, like most other schools in China. Meanwhile, the school is offering e-learning via email.

A kindergarten’s e-learning class includes a prerecorded video of less than two minutes from the teacher, a picture and four pages of coloring homework, aiming to teach children to pronounce and write the English letter “P,” according to an email provided by a parent.

Several parents said they want the school to provide online teaching equivalent to offline classes as much as possible, but they also complained that the online education created an “overwhelming” burden for parents who have to sit through the classes with younger children. A second-grader’s parent said some parents do not have good enough English skills to help their children with lessons.

To improve teaching quality, the school started a weekly half hour of live teaching through Zoom, a popular video conferencing tool, in late March. But it turned out to be more like an online chat session that a class, parents said.

The British School of Beijing, Sanlitun, is urging parents to pay tuition for the semester running from April 6 to June 18, and there will be a discount on the next semester’s tuition equal to 10% of the fees paid this time. The school also told parents that the tuition for the previous semester running Jan. 6 to March 26 will not be refunded. The two semesters’ total tuition could easily cost 60,000 yuan to 70,000 yuan.

In late March, parents got an email from the school urging them to pay tuition for the semester starting April, but the school then said the email was sent automatically and parents should wait until the school reopens to pay the fees. However, earlier this month, several parents said that the school called them to ask for payment. Many parents argued that the school has unilaterally shifted its economic losses to parents.

In its latest payment plan, the Sanlitun school’s principal said they are considering providing free summer classes starting June 22 for all students and offering free tutoring once the school reopens.

However, as the outbreak continues to spread globally, it’s still not certain when the school’s many foreign teachers can come back to Beijing, as China late last month banned all foreign nationals from entering the country. Many parents said they are pessimistic about the outlook for reopening in the near term.

According to Nord Anglia’s public financial data before its most recent privatization, its schools in China were its most profitable, raking in more cash than those in North America, Europe, the Middle East and Southeast Asia. Nord Anglia at present runs 66 schools around the world, 17 of which are in China and 10 in the U.S., according to its website.