By Lu Yutong and Zheng Lichun 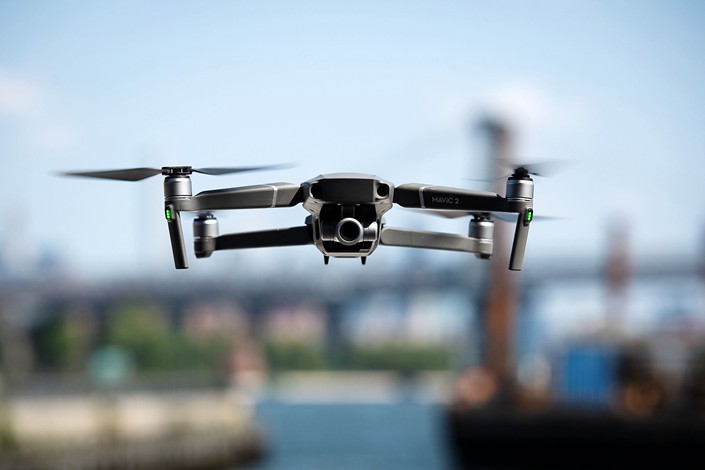 The world’s biggest commercial drone-maker SZ DJI Technology Co. Ltd. has no access to the information collected by the drones it has sold abroad, the company said in response to questions about data security as more countries deploy its products in the battle against the coronavirus pandemic.

“We can’t get the data; this is not our business,” a company spokesman said Monday in response to Caixin’s questions about the issue. “Some of our commercial plans include data collection, but those (data) belong to our clients.”

Questions about the security of data collected by the Chinese company’s drones date back to at least last year, but the issue has grown more significant this year as more overseas governments have been using the drones amid the pandemic. DJI’s products have been widely used in several countries to help governments spray disinfectant and keep people indoors, despite concerns about data security raised by U.S. companies and officials.

Last month, Chile and Columbia both deployed DJI’s MG-1P agricultural drones to disinfect streets and neighborhoods, the company said on social media. The agricultural series of drones was also used to conduct mass disinfections in the Philippines, Dubai and Indonesia, as well as virus-ravaged Spain.

The company’s Mavic 2 enterprise drones have been employed as flying loudspeakers in Malaysia, the United Arab Emirates and the French city of Nice to blast out messages warning people to stay home. The drones have also been equipped with infrared thermography to help detect whether crowds are gathering in public.

In Dubai, police have attached cameras to DJI’s Matrice 200 drones to keep an eye on closed public areas, and Austria has deployed the company’s Phantom drones to control traffic in an effort to help prevent local police officers from getting infected.

DJI hasn’t disclosed the exact number of orders it has taken since the pandemic began. However, it has not seen a dramatic spike in orders, its spokesman said.

Rather, the more significant change has been among overseas managers and officials, who have begun to realize the importance of the technology and the people who maintain it, the spokesman said.

DJI is just the latest Chinese tech company to face scrutiny over how it handles sensitive data abroad. Bytedance, which runs short-video sharing app Tiktok, fell under investigation last year by the Committee on Foreign Investment in the United States over its two-year-old acquisition of a popular American lip-sync video app. The same committee pressured the Chinese owner of popular gay dating app Grindr to offload that platform in March. National security concerns were cited in both instances.