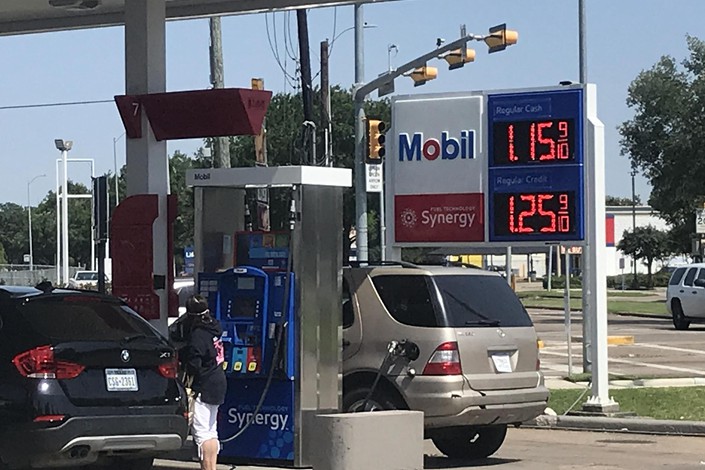 (Bloomberg) — Oil rebounded in Asian trading, after plunging below zero for the first time in history amid rapidly filling American storage tanks, as the U.S. benchmark’s May contract entered its final trading session.

Futures in New York traded at around $2 a barrel after sinking to as low as minus $40.32 during Monday’s jaw-dropping collapse. The June contract, however, which had trading volumes more than 40 times higher, rose toward $22. The spread between the two reflects the growing fear that those who take physical delivery of crude in the near future may not find any outlet or storage for those barrels as refineries curb operations.

With the coronavirus pandemic bringing the U.S. and much of the global economy to a standstill, processors are using far less crude, leaving so much unused oil sloshing around that American energy companies are running out of room to store it. And if there’s no place to put the oil, nobody wants a crude contract that is about to come due.

“An unprecedented collapse to minus $40 oil at the U.S. benchmark had a lot to do with the expiry of the May contract,” said Jason Bordoff, director of the Center on Global Energy Policy at Columbia University and a former White House energy advisor. But it also “reveals significant underlying structural problems as storage capacity fills up that will hang over U.S. prices until supply shuts in and OPEC+ cuts begin to bite,” he said.

The extreme moves in West Texas Intermediate crude show just how oversupplied the U.S. oil market has become. Global benchmark Brent, by contrast, is trading above $26 a barrel as demand in China recovers. The WTI June contract is likely to see downward pressure in coming weeks and there will be a “violent rebalancing” in American production as storage fills up, Goldman Sachs Group Inc. said in a note.

Oil prices have plunged as coronavirus infections surge, prompting lockdowns and travel bans that have led to a collapse in consumption. The breakdown of the OPEC+ alliance in early March compounded the situation, while the subsequent output-cut agreement proved too little and too late in the face of a one-third collapse in global demand.

The May crude oil contract is going out not with a whimper, but a primal scream,” said Daniel Yergin, a Pulitzer Prize-winning oil historian and vice chairman of IHS Markit Ltd.

Crude stockpiles at Cushing — America’s key storage hub and delivery point of the WTI contract — have jumped 48% to almost 55 million barrels since the end of February. The hub had working storage capacity of 76 million as of Sept. 30, according to the Energy Information Administration. Cushing is likely to be completely full by the first week of May, Goldman said in the note by analysts including Damien Courvalin.

Despite the weakness in headline prices, retail investors are continuing to plow money back into oil futures. The U.S. Oil Fund ETF saw a record $552 million come in on Friday, taking total inflows last week to $1.6 billion.

The price collapse is reverberating across the oil industry. Even before Monday’s plunge, buyers in Texas were offering as little as $2 a barrel last week for some oil streams. In Asia, bankers are increasingly reluctant to give commodity traders the credit to survive as lenders grow ever more fearful about the risk of a catastrophic default.

“If we don’t start seeing a recovery in demand soon, it’s likely that the June contract may face a similar fate” as U.S. storage keeps filling, said Warren Patterson, head of commodities strategy at ING Bank NV in Singapore. “It seems as though April will be the month for peak demand destruction, and then we will start to see a slow recovery moving forward.”