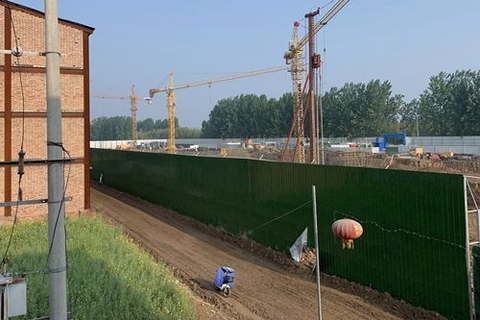 The construction site in Yuanyang, Henan, where four boys’ bodies were uncovered April 18.

Three county officials in central China’s Henan province were held accountable for the death of four children over the weekend at an allegedly illegal construction site.

Four boys, ages 5 to 11, were found dead April 18 in a pit at a construction site in Yuanyang county under Xinxiang city. A preliminary investigation found that the children were likely to have been buried in the pit and suffocated, according to county officials.

Local residents told Caixin that the boy were playing in the pit, which was about two meters below ground level, when the operator of a dump truck poured loose earth into the pit without realizing they were there. Residents blamed lax management of the site for allowing the children to sneak in.

According to a local government-backed newspaper, eight individuals from the construction team and the project developer were placed in custody by police on April 19.

Government investigators found that the site for construction of a residential compound didn’t obtain necessary approval to start work, the report said. The dump truck was also operated in violation of safety rules.

A relative of a victim told Caixin that the construction site was enclosed by metal sheets, but there were many gaps that could allow people to enter.

“Workers were digging foundation at the sight when the children sneaked in to play,” one resident said. “The truck dumped soil and buried them without noticing, and the bodies were discovered when another truck dug in the pit.”

The father of a 5-year-old victim told Caixin that his son was playing with three other boys around 4 p.m. April 18, but parents later were unable to find the children. Around 5:30, people heard from the construction site about the discovery of a boy’s body. Others were found around 8 p.m. The bodies were damaged badly, said the father.

A marketing document showed that the site, covering 15 hectares, was registered for residential project development in 2019 by Xinxiang Zhongfu Real Estate Co.

Caixin’s calls to the developer went unanswered. Business registration records showed that the company was set up in 2018 with 20 million yuan of registered capital and was wholly controlled by an individual named Wu Yaochen.