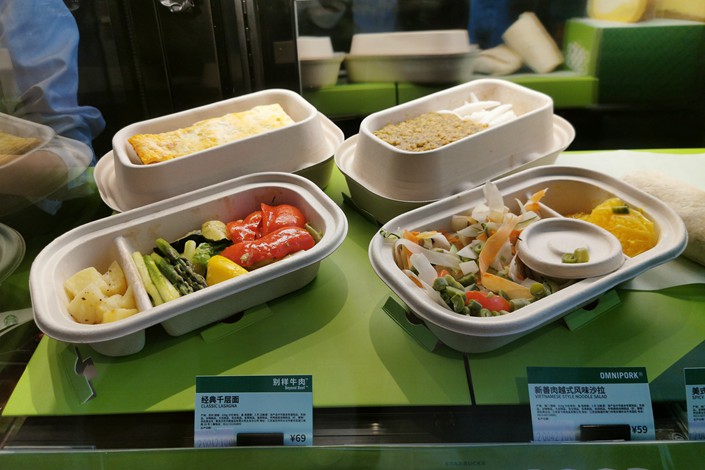 Food products including Beyond Meat's plant-based meat alternatives on sale in a Shanghai Starbucks on April 22.

A new generation of plant-based imitation meat makers is finally getting a taste of the China market, following a series of major new product launches announced over the past week.

The biggest of those saw coffee giant Starbucks Corp. announce a major new tie-up on Tuesday with partners including artificial meat highflyer Beyond Meat Inc. Just a day earlier, fast-food giant KFC announced its own trial for veggie chicken nuggets with U.S. agricultural giant Cargill. And days before that, U.S. pizza chain Papa John’s International Inc. announced its own fake meat tie-up that will see it offer imitation meatballs on some of its pizzas in China.

The string of tie-ups comes as China sees some of its highest prices in years for pork, the nation’s favorite meat, following the decimation of stocks during an African swine fever outbreak that has dragged on for more than a year. That outbreak has caused pork prices to double over the last year, and led to a recent spike in pork imports to record highs.

Still, observers say the fake meat products could be a tough sell due to psychological and other barriers. Accordingly, the new generation of plant-based meat substitutes will have their work cut out.

Starbucks made the biggest headlines this week with an announcement that it would roll out several fake pork and beef products at its 4,300 China stores. Beyond Meat is marking its formal entry to China with the launch of three Starbucks offerings using its fake beef. The chain will also offer two imitation pork dishes using OmniPork, a product produced by Right Treat, a unit of Hong Kong’s Green Monday.

Investors cheered the Beyond Meat tie-up, bidding up the company’s shares by 7.4% on Tuesday after the deal was announced.

“Starbucks invites new generations of Chinese consumers to effect real change by taking simple actions in their daily lives to make the world better,” the company said in announcing the move. “As a leading innovator in the industry, Starbucks is committed to constantly reimagining its menu to offer a range of food and beverage choices for customers.”

Beyond Meat has been working with Starbucks since February, and the latest deal marks an extension of that. Meanwhile, the OmniPork product that Starbucks will use in China has been available in the country since last November. It is now for sale on Alibaba’s popular Tmall e-commerce platform and available in many hotels and restaurants in Beijing and Shanghai.

Meantime, KFC announced its own experiment with plant-based meat substitutes on its microblog on Weibo, the Chinese equivalent of Twitter. The promotion will run for three days at three different restaurants, one in Shanghai, one in Guangzhou and one in Shenzhen. Raw materials for the nuggets are being supplied by Cargill and are made from proteins found in soybeans, wheat and peas.

The promotion will mark KFC’s first time rolling out plant-based imitation meat products in China. The chain, famous as a pioneer for developing localized products in its different markets, will use the promotion to gather customer feedback before deciding its next move.

Despite the new wave of initiatives, it remains to be seen if Chinese consumers will embrace the imitation meats. Plant-based meat substitutes are currently more expensive than real meat, costing 25% to 30% more in places like Hong Kong and the U.S.

Among 1,500 Chinese consumers polled in a survey on the subject last year, 51.3% said they weren’t interested in trying artificial meat, according to market research firm iiMedia. Less than 30% said they were interested. Those who weren’t interested cited a number of reasons, including psychological ones, immature products and concerns about the feeling in their mouths. “For artificial meats to make inroads to China, the psychological barrier is the most important task” for these companies, iiMedia said.