By Yang Ge and Yue Yue 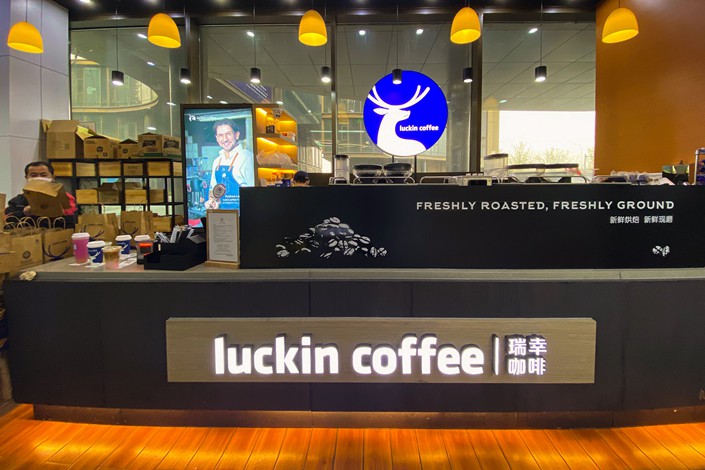 A Luckin Coffee shop in Beijing on April 6.

The U.S. securities regulator has warned on the dangers of investing in emerging market stocks, singling out China in particular, weeks after two U.S.-listed Chinese firms admitted to accounting scandals that triggered sell-offs wiping out billions of dollars in shareholder value.

Such companies pose a number of risks, most centered on the quality of their financial reports and limits on shareholders’ ability to take legal action when fraud or other illegal activity occurs, according to the article published on the U.S. Securities and Exchange Commission’s (SEC’s) website on Tuesday. The article was credited to five authors, led by SEC Chairman Jay Clayton and William D. Duhnke III, chairman of the Public Company Accounting Oversight Board (PCAOB).

Private Chinese companies have been a source of frustration for the agency since they began listing on both the New York Stock Exchange and the Nasdaq around the turn of the century, many connected to China’s burgeoning internet. Such companies must still follow NYSE and Nasdaq listing rules in terms of reporting and share price, among other requirements. But jurisdictional issues can keep many of their accounting records and executives outside the reach of SEC investigators and U.S. law enforcement.

At the same time, U.S. investors have developed a taste for such companies because of their high growth potential. New York-listed companies like e-commerce giants Alibaba and JD.com, as well as Chinese search leader Baidu and gaming giant NetEase, are all top-tier names in their fields in the world’s largest internet market. All have market values of $30 billion or more, and Alibaba is one of the world’s largest companies with a market capitalization of nearly $600 billion.

But such companies come with an unusual set of strings attached, which aren’t seen in comparable U.S.-based companies listed on American stock exchanges, the SEC warned.

“Due to jurisdictional limitations, matters of comity and various other factors, the SEC, Department of Justice and other U.S. authorities may be limited in their ability to pursue bad actors, including in instances of fraud, in emerging markets,” wrote the article’s authors. “For example, in China, there are significant legal and other obstacles to obtaining information needed for investigations or litigation. Similar limitations apply to the pursuit of actions against individuals, including officers, directors and individual gatekeepers, who may have engaged in fraud or other wrongdoing.”

The regulator issued the article about three weeks after the shock disclosure by upstart coffee chain Luckin that nearly half of its revenue in the last three quarters of last year — more than $300 million — might be fake. It blamed the fraud on its chief operating officer, and the company’s shares lost more than 80% of their value before a rare trading halt was imposed pending further disclosure.

Just five days after Luckin’s disclosure, TAL Education announced that a routine internal audit had turned up revenue inflation by an employee in the company’s recently introduced “light class” business. It didn’t elaborate on the extent of the inflation, but noted that business accounted for a relatively modest 3% to 4% of its total revenue for the 12 months ended Feb. 29, 2020. TAL shares have lost nearly 10% of their value since the disclosure.

The SEC article mentioned China 22 times, and included a section on its “inability to inspect audit work papers in China.” That inaccessibility made headlines nearly a decade ago when fraud uncovered at a company called Longtop Financial set off a confidence crisis in U.S.-listed Chinese companies that ended with an SEC-led cleanup of the group.

In the Longtop case and now with Luckin, affiliates of major accounting firms acted as the companies’ auditors, giving their financials extra credibility. Longtop’s auditor was associated with global giant Deloitte, while Luckin’s is an affiliate of Ernst & Young. But the SEC pointed out that work done by such auditors in China is often out of its reach, and that routine audit work may be done by purely local accounting firms.

“Even when the auditor signing the audit report is not based in China, if the company has operations in China, investors should consider whether significant portions of the audit may have been performed by firms in China, and the potential impact of the PCAOB’s inability to access such audit work papers,” the SEC article said.

It also said investors should consider the quality of each company’s own internal audit committee.

“Not all jurisdictions mandate independent audit committees or have similar requirements,” the article said. “Investors should consider the impact of a company’s corporate governance structure, including the role of the audit committee or similar oversight, when making investment decisions in emerging markets.”