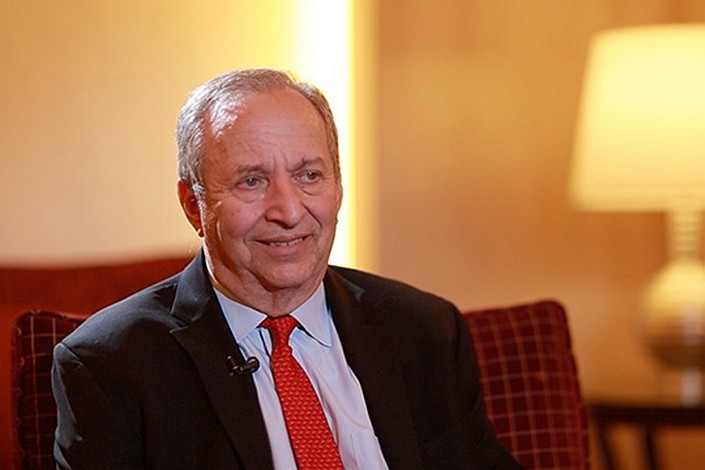 As the world’s economic outlook could be dimmer than forecast by the International Monetary Fund (IMF), all countries should be aware of risks of more layoffs and financial aftershocks caused by cascading debt problems, said Lawrence Summers, Harvard University professor and former U.S. Treasury Secretary.

“I am more alarmed about the economic prospects, certainly more than at any time in my career,” Summers said Friday at a Caixin roundtable.

Summers’ remarks come days after the IMF predicted that the global economy will shrink 3% this year in the shadow of the coronavirus pandemic, much worse than during the 2008 to 2009 financial crisis.

In a baseline scenario — which assumes that the pandemic fades in the second half of this year and containment efforts can be gradually unwound — the global economy is projected to grow 5.8% next year, the IMF said in a report.

“If you look at that IMF forecast carefully, what’s interesting is that it is a funny kind of baseline. It is a baseline scenario that is accompanied by two more adverse scenarios, and no more favorable scenario,” Summers said. “So realistically, what the IMF calls its economic forecast is half its hope and half its expectation, which means that its actual expectation is, and should be, a good deal less favorable.”

Over the past few weeks, the caseload of global coronavirus infections has been surging despite multiple countries’ efforts to slow the virus’s spread. As of noon Thursday Beijing time, the virus had infected more than 2.6 million people worldwide, claiming more than 183,000 lives, according to data compiled by Johns Hopkins University.

Currently, some expect rapid declines in hospitalizations for Covid-19 patients and deaths from the virus in the next few weeks to allow the global economy to move to a smooth reopening phase and regain lost ground.

Summers said he holds a different view, explaining his judgement in four aspects.

First, the new regime will be less favorable for the economy, he said. For instance, restaurants may only seat half as many customers for proper spacing, and people will be reluctant to get on airplanes or stay in hotel rooms whose sanitization they cannot be sure of.

Second, relapse risk is substantial everywhere. While China cannot be entirely certain that it is immune from relapse risk, countries like the U.S. that are less capable of implementing extensive testing, tracing and quarantining measures are at significantly greater relapse risk, Summers said.

What’s more, there is substantial risk of follow-on layoffs. Given all the uncertainties in the reduction in demand, when the massive financial support that is being provided in the U.S. and most European countries ends, there will be further rounds of layoffs that will tend to offset the other sectors in which there is progress, he said.

In the U.S., many major land tenants such as retailers are not paying rents right now, which is something that landlords can absorb for a time, he said. But at some point, the landlords will not be able to pay mortgages or debts, and the problem is going to fall back to the financial system, he predicted, adding that this problem has been generally underestimated by emerging market policymakers until the full brunt has been felt.

Addressing the issue of international collaboration, Summers urged the U.S. and China to work together to combat the disease, as there are “many examples of rising stridency in the rhetoric and the use of threats between our two countries at a time when it seems to me all of our energy should be devoted to the common threat rather than two rivalries within humanity.”