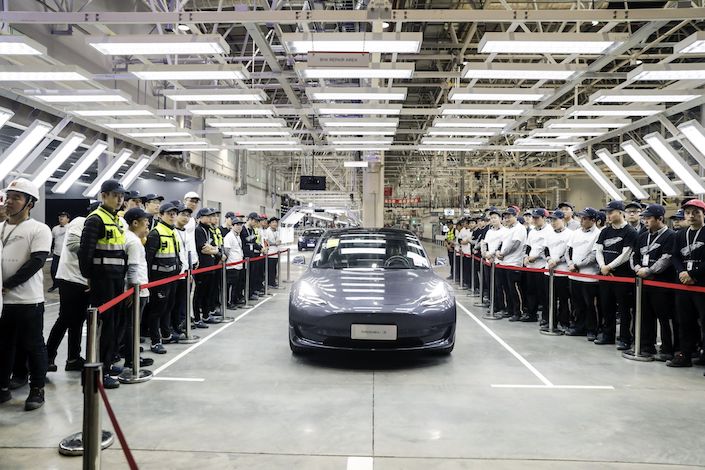 A Tesla Model 3 vehicle set to be delivered to a company employee moves off an assembly line during a ceremony at the company's Gigafactory in Shanghai. Photo: Bloomberg

NEV incentives that were due to phase out by the end of this year will be extended until 2023. Subsidies will be cut from a year earlier by 10% this year, 20% next year and 30% in 2022, according to a notice issued Thursday by the Finance Ministry.

China introduced NEV incentives a decade ago, spurring explosive growth in the market for battery electric, fuel cell, and plug-in hybrid vehicles. Since 2017, policymakers have been trimming the subsidies in hopes of putting the industry on a sustainable track and making it less reliant on state support.

Overall NEV sales dropped 4% year-on-year in 2019 to 1.2 million vehicles, the first annual decline ever. Entering 2020, the auto industry has taken a hit from the Covid-19 pandemic, which froze business and forced city lockdowns. In the first three months of 2020, overall NEV sales plunged by 56%, according to the China Association of Automobile Manufacturers.

For the first time, the finance ministry has imposed an annual cap on the number of vehicles that can get the subsidies. According to the notice, at most 2 million NEVs can receive the subsidies, compared with the 1.2 million sold in 2019.

The subsidies are also limited to locally made vehicles that cost less than 300,000 yuan, which means Tesla’s Model 3 made in China and sold for 328,000 yuan won’t qualify. Chinese electric car makers Nio and Lixiang Automotive also have models that cost more than 300,000 yuan.

Li Xiang, founder of Lixiang Automotive, said the limit could give Tesla an incentive to cut its prices. If Tesla lowers the price of its basic Model 3 to 300,000 yuan, the car could sell for a little more than 270,000 yuan after subsidies. This would deliver a “devastating blow” to domestic brands in the 200,000-400,000 yuan price range, Li said.

The new subsidies standard also gives an edge to cars with swappable batteries, a technology allowing drivers to quickly change out their electric vehicle’s battery rather than having to plug it in to recharge. Swappable batteries would potentially save time for drivers — one of the biggest complaints consumers have with electric cars, but cost more than plug-in batteries.