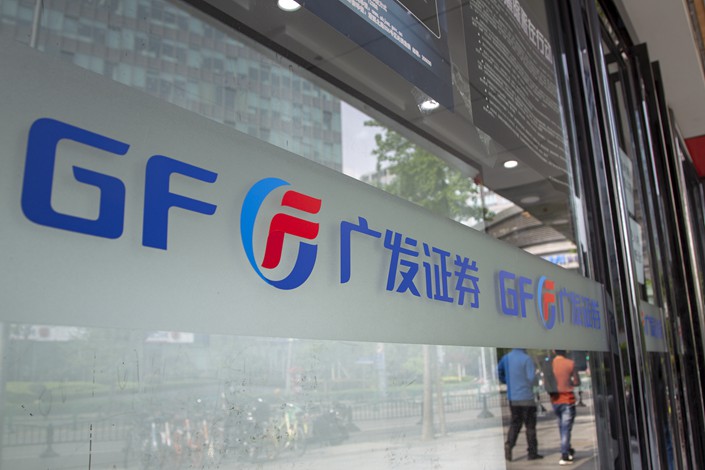 A GF Securities branch in Shanghai on April 22.

The general manager of Shenzhen- and Hong Kong-listed GF Securities Co. Ltd. has resigned following a major financial fraud by one of its clients and the failure of one of its hedge funds, triggering massive losses for the brokerage.

The company said in a Tuesday filing that Lin Zhihai, 56, the general manager and executive director, resigned for health reasons.

But several sources familiar with the matter told Caixin that Lin resigned due to his accountability for issues related to a fraud by Kangmei Pharmaceutical Co. Ltd., a major GF client and one of China’s largest listed drugmakers. In late 2018, Kangmei was put under investigation by China’s top securities regulator for alleged accounting fabrication. In August last year, the regulator punished 22 employees at Kangmei for financial reporting fraud, including 88.6 billion yuan ($12.6 billion) of overstatements.

GF was an underwriter of Kangmei’s initial public offering in Shanghai in 2001 and since then has underwritten issuance of multiple bonds and shares for the company. The two companies had cooperated for 18 years (link in Chinese) before the 2018 scandal broke.

In addition, people with knowledge of the matter said Lin’s resignation follows the failure of a hedge fund set up by one of GF’s Hong Kong units, which lost GF more than 900 million yuan in 2018. Lin was chairman of the Hong Kong unit during that period.

Lin’s resignation shocked many in the industry. Lin joined GF in 1996 when the business was in an early stage and expanding aggressively. Lin began his term as general manager in April 2011.

The Tuesday filing said Sun Shuming, the 58-year-old chairman of GF, will take over Lin’s role as general manager. But according to GF’s internal rules, to separate the power of the two roles, the chairman and the general manager cannot be the same person, which suggests that Sun will only temporarily serve as the general manager until GF appoints somebody else to the role.

A source close to GF told Caixin that Zhang Wei, a GF deputy general manager, will likely be promoted to general manager as he has the most support inside the company. Zhang mainly engages in the company’s asset management and fixed income businesses. He also led the company’s clean-up efforts after the Kangmei scandal.

Qin Li, the new chairman of the GF Hong Kong unit, is believed to be another strong candidate to fill in as general manager.

It seems the successor will bear a heavy burden left by the Kangmei scandal. In 2019, GF reported credit loss expenses of nearly 680 million yuan, up 124% year-on-year, according to its financial report. Some losses were likely related to its loans to Kangmei shareholders.

Several sources close to GF told Caixin that the securities regulator has not yet decided on penalties against GF for the Kangmei fraud, as Kangmei has applied to the regulator for a reconsideration of the punishment.