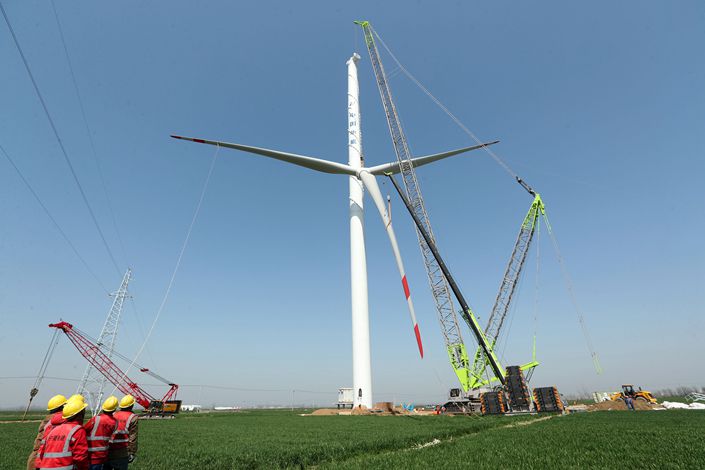 As spending on wind power stations nearly tripled in the first quarter, China’s power generation facilities received more investment than its power distribution grids for the first time in any quarter since 2013.

A total of 59.6 billion yuan ($8.4 billion) was invested in power plant projects, up by 30.9% year-on-year, while investment in energy transmission declined by 27.4% to 36.5 billion yuan in the first three months of 2020, according to data released Wednesday by the National Energy Administration.

This marked a significant change from previous years. In 2018, power grid projects received twice as much investment as power generation projects.

Xue Jing, an electricity sector expert at a state-run trade association, attributed the decline in power grid investment to investors waiting to see the content of the government’s “new infrastructure” development blueprint, further details of which were released earlier this month. The plan aims to encourage investment and growth in information-based, innovative infrastructure, such as 5G, smart energy infrastructure and scientific research labs.

The coronavirus and issues around land purchases have also delayed investment, she said.

To sell electricity in China, power plants must be connected to the country’s state-run power grid, which is operated by two stated-owned conglomerates State Grid Corp. and China Southern Power Grid Co. Ltd.

A surge in wind power investment is behind the strong growth in power plant spending, outpacing other areas to grow 185.9% to 28.1 billion yuan in the first quarter.

“This is because 2020 is the last year of state subsidies for new wind power installation, so companies are rushing to build more” said Li Rong, an analyst at Sinolink Securities.

China is scrapping subsidies for new offshore wind farms at the end of this year in an effort to help the renewable industry stand on its own. It also plans to end subsidies for new onshore projects in 2021, which could ease strains on the central government’s budget.

But the increased investment in power plants may be short-lived, said Xue, adding that it is hard to predict what the trend will be for the full year.