Solar Power Fades With End of State Support, but Seen Stabilizing in 2020 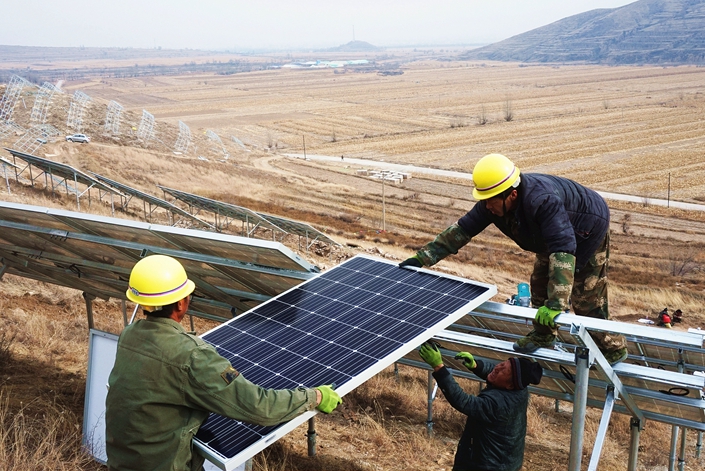 China added 50% less new solar power generation capacity in the first 10 months of this year versus 2018 as state support waned, but analysts said the situation could stabilize next year as the renewable energy source becomes more economically competitive.

Installations of new solar energy totaled 17.5 gigawatts (GW) this year through October, including only 1.5 GW added since the end of September. The 10-month total is just half of the increase in the same period last year, according to Wang Bohua, secretary general of the China Photovoltaic Industry Association, which represents many solar-panel makers. He forecast net additions of 30 GW for all of 2019 — well below the government’s forecast of 40 GW to 45 GW.

The decline has come as China phases out subsidies for solar power, following several years of strong support to offset the higher costs of producing the clean energy compared with traditional sources like gas and coal. Such subsidies led to rapid installation of new solar power in the last few years, giving China some of the fastest growth in the world.

But the rapid growth also saw problems emerge, including severe overcapacity and poorly planned solar farms. That led China to gradually phase out the problem-beset subsidy policy this year.

A strict, less lucrative new program took effect in July as part of Beijing’s plan to wean the sector from state support. Under the new system, solar plants can no longer sell electricity to the grid at fixed prices, but instead must compete against each other in a bidding system designed to win the grid operator the lowest rates.

The new system has been one of the major factors dampening new installations, said an analyst at a major Western research house, speaking on condition his name not be used due to company policy. He also blamed the slowdown on the winding down of a government program designed to bring solar power to China’s poorer regions, which had been contributing about one-quarter of new installations over the last few years.

He said that like the Photovoltaic Industry Association, his organization was also forecasting total installations would reach about 30 GW this year, down by about one-third from 2018. But he predicted the figure would be similar in 2020, between 28 GW and 32 GW, as the situation stabilizes.

In addition to providing generally lower prices, the new system also comes with strict delivery timelines that could result in penalties if deadlines are missed, Zhang Xiaochao, an official in the new-energy division of power generating giant China Huaneng Group, told Caixin. He said winning bidders when the program was launched will be penalized with lower power rates if they fail to deliver by the end of the year.

Wang Jixue, deputy director of the new-energy department at the China Renewable Energy Engineering Institute, said the last batch of bidding projects under the current program will be carried out in 2020. That could mean the bidding system might be terminated in 2021. It was unclear if any new support programs would be launched after that, but many believe that all subsidies for the sector may end at that time, according to the solar analyst.