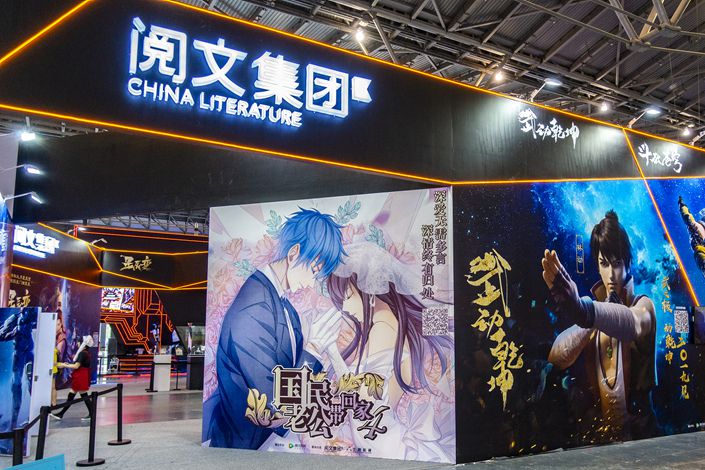 China Literature Ltd. has decided to replace its founding management team with a slate of veteran executives from its controlling shareholder Tencent Holdings Ltd. as the online platform’s business has shifted to focus more on peddling intellectual property.

The departing managers include 41-year-old Wu Wenhui, who founded Qidian.com, a pioneer in the online literature world that was later acquired by Tencent; his fellow co-CEO, Liang Xiaodong; company President Shang Xuesong, and Senior Vice President Lin Tingfeng, according to a statement released Monday by the Hong Kong-listed China Literature.

Wu, who holds a 2.65% stake at China Literature, will remain on the company’s board as a nonexecutive director and vice chairman. Cheng and Hou will become executive board directors.

The latest management change comes as China Literature’s business is shifting away from making money off subscriptions, advertising and other revenue from its “online business” of giving readers access to its platform’s content. Over the last three years, the company has been making more and more of its revenue through its intellectual property (IP) operations, in which it sells the rights to produce its platform’s content to movie and TV studios.

According to China Literature’s financial statement, revenues from its IP-related business more than tripled in the second half of 2019 to 3.33 billion yuan ($465.9 million). In comparison, the remainder of the company’s revenues grew by 5% year-on-year to 2.05 billion yuan.

The shift resulted in strong growth of the company’s total revenues and net profits in 2019. Total revenues nearly doubled in the second half of last year, the fastest year-on-year growth since 2018.

Wu and his team started the website that would eventually become China Literature from scratch 18 years ago, but they aren’t as savvy with the new IP-focused operations as they are with the company’s initial business model, a filmmaking industry executive told Caixin.

In Monday’s statement, Wu acknowledged that China Literature was entering a new stage in its development and it was time for a change in management. “In the future, it is essential for China Literature to build on our IP portfolio in establishing a more open ecosystem and new commercial rules to embrace future trends,” he said in the statement.

Cheng, Wu’s successor, has been with Tencent for 11 years. Last year, he created a hit TV show that was adapted from a work of fiction owned by China Literature, a source working for Tencent told Caixin.

Shares of China Literature rose the next day after the Monday evening announcement. The stock jumped 14.4% Tuesday to close at HK$36.55 ($4.72) in Hong Kong.