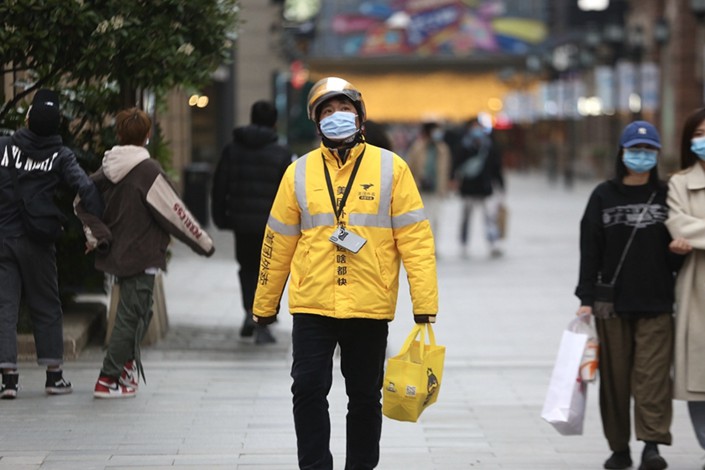 Meituan has been accused of charging its partners excessively high commission fees and forcing them to sign exclusive contracts. Photo: IC Photo

A few years from now, many may look at the past few months as a defining period for internet services giant Meituan Dianping.

The nationwide lockdowns since January have struck at the heart of the online-to-offline businesses it relies on — movie theaters, hotels, and restaurants. CEO Wang Xing has warned that Meituan could sink back into the red in the first quarter after reporting quarterly profits three times last year.

Covid-19 has also been a pressure test for Meituan’s relationship with the millions of businesses that use its platform, marketing services and huge fleet of delivery drivers.

Since the epidemic started early this year, the company has been subject to criticism by industry associations across China, which have called on the company to “go through the hardship together” with restaurants. Meituan has been accused of charging its partners excessively high commission fees and forcing them to sign exclusive contracts.

This is a defining event for Meituan, which needs to “redraw the lines” of how it works with its partner businesses, said an employee at rival Alibaba Group Holdings Ltd. “If Meituan deals with this well, its business model will prevail (for years to come).”

Founded in 2010, Meituan operates a variety of businesses from hotel booking to ride-hailing. However, it generates most of its revenue from food delivery, which made up nearly 60% of the company’s total sales in 2019.

Meituan reported its first profit in the second quarter in 2019, the first time it had done so since going public in June 2018, and kept this up for the following two quarters, propelling it to generate its first annual profit — 4.7 billion yuan ($665 million) — since it was founded in 2010.

This was the result of its strategy to squeeze more money out of its partners, as well as its deprioritizing of some new business lines such as ride-hailing. The so-called monetization rate — the ratio of revenue to the total transaction value — for its food delivery business increased to 14% last year from 8% in 2016, according to the company’s 2019 financial report.

The increase in monetization came after Meituan raised the commission fees it charges merchants. While many restaurants were able to bear this increased cost in normal times when they had a more profitable income source in eat-in dining, the Covid-19 pandemic has seen many relying completely on takeout orders, sparking a backlash against the higher fees.

The highest-profile incident came early last month, when a restaurant association in South China’s wealthy Guangdong province called out the company. Following similar letters from other such associations in numerous other provinces, a public letter posted online on April 10 by China’s largest regional catering industry body said (link in Chinese) it had received complaints from hundreds of restaurants who wanted Meituan to lower its commission fees.

Meituan has used its “monopoly” market status to set unfair rules, increasingly pushing up commission rates to a point “beyond the level merchants can accept,” the Guangdong Restaurant Association (GRA) wrote in the letter. “Restaurants have previously not cared much; but Meituan continued the practice amid the coronavirus outbreak, which has led to many expressing their grievances.”

“Platform operators are becoming more and more aggressive in setting rates, as merchants are increasingly reliant on their platforms,” said an employee with a large restaurant chain, who asked to remain anonymous due to fear of retribution from Meituan.

The GRA said in the letter that these fees could take up as much as 26% of the cost of a transaction for some new businesses, and asked Meituan to lower the rate by 5%.

Meituan Senior Vice President Wang Puzhong responded to the GRA letter on April 13, saying that Meituan’s average profit per delivery order was less than 0.2 yuan in the fourth quarter, accounting for just 2% of its revenue. Its takeout business lost money for five years before breaking even in 2019, according to Wang, who oversees Meituan’s food delivery business.

The GRA hit back the following day, accusing Meituan of releasing “false” data and demanding a response with “substantial meaning” by April 17.

To the surprise of many, Meituan offered an olive branch, issuing a statement on April 15 in which it would say that it would refund between 3% and 6% of commission fees to “good-quality merchants.”

However, these rebates would not take the form of cash payments, but company credit that they can use to spend on Meituan services such as marketing campaigns.

Still, this widespread pushback from merchants has produced mixed feelings inside the company. “Should Meituan give in this time, it could set a bad precedent for future similar requests from merchants,” said a company source.

“It is unrealistic to think that Meituan is capable of propping up China’s eatery industry,” said another employee of Meituan’s takeout business. “In 2019, Meituan’s food delivery transactions amounted to just 392.7 billion yuan, or less than than 10% of the total 4 trillion yuan sales of China’s eateries that year,” the employee said.

Many others pointed to the company’s financial responsibilities. As a public company, Meituan has a duty to its shareholders and cannot return to making huge losses, said a third company source. More importantly, “Meituan’s cash flow is limited,” the source said.

Meituan’s financial statements show that its cash reserves have gradually declined in recent years. At the end of last year, Meituan had cash and cash equivalents of 13.4 billion yuan, half of the number in early 2018.

The commission fee rebate was not the only concession Meituan made to the GRA. It also met another key demand, promising to release GRA merchants from exclusive contracts.

This will allow these merchants to work with other platforms besides Meituan, including its archrival Alibaba, which has been ramping up its competition in the online-to-offline services space.

In March, Alibaba announced the biggest-ever revision to its affiliated Alipay app — one of the country’s two largest mobile payment platforms — adopting a design resembling that of Meituan’s namesake app. By doing this, Alibaba, which has its own vast takeout delivery fleet in its Ele.me unit, will also allow merchants to tap into its vast user base, potentially making the company a more attractive partner.

That followed an earlier announcement that the company was folding its travel and hotel businesses into a new “hyperlocal services” unit. Also in March, Alibaba announced it was adjusting which businesses this unit would oversee, giving it a similar portfolio to Meituan.

Adding to a series of other existing business including hotel accommodation and ticket booking, on top of Ele.me, Alibaba’s hyperlocal unit may already be larger than Meituan, said an executive at Ant Financial, the Alibaba-affiliated financial services company that runs the Alipay app.

For the last quarter of 2019, Alibaba reported revenue of 161 billion yuan compared to Meituan’s 28.2 billion yuan, according to their latest earnings reports.