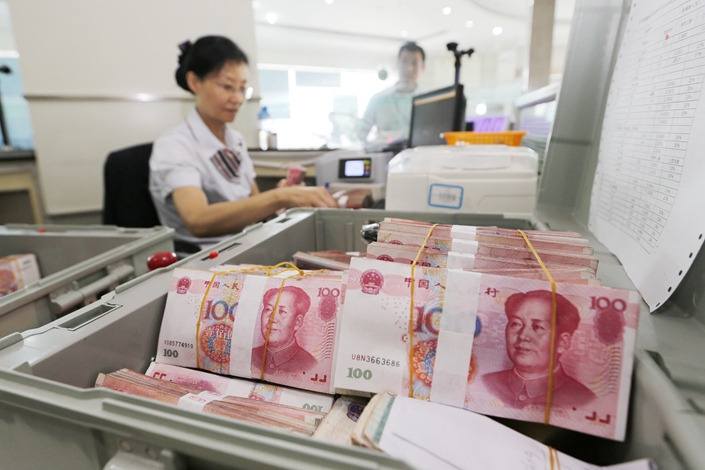 China’s central bank plans to lend 300 billion yuan ($42.6 billion) in cheap funds to banks, encouraging them to provide low-interest loans for struggling companies on the frontlines of the battle against the new coronavirus.

The policy, announced Feb. 1 (link in Chinese) by the People’s Bank of China (PBOC) and four other government bodies and fleshed out (link in Chinese) a few days later, has instructed banks to offer cheap loans to major companies that make, transport or sell medical supplies or daily necessities. The measure comes as China ramps up efforts to support these enterprises, some of which are suffering short-term cash problems after the coronavirus outbreak prompted governments to suspend factory production and restrict transportation and the movement of people in many cities across the country, disrupting their normal business operations.

However, some deep-pocketed companies’ attempts to take advantage of the policy have sparked concerns that less capital will flow to businesses that actually need the money.

As it is very possible that some businesses will take advantage of the preferential interest rates for their own gain, each department should take care of and make good use of the “emergency, life-saving money,” Liu Guoqiang, a deputy central bank governor, said (link in Chinese) at a Feb. 9 meeting.

This cut-rate loan program is being undertaken via the central bank’s 300 billion yuan special-purpose relending project, through which the central bank usually lends to commercial banks so they can make loans to achieve “certain objectives.” The program aims to support commercial banks in providing discount loans for key enterprises involved in the production, shipment and sale of essential medical supplies to control the epidemic or critical daily necessities.

Commercial banks need to cap their one-year rates on the loans at 1 percentage point below the latest national loan prime rate (LPR) of the same tenor, which meant an upper limit of 3.15% as of the first week of February, the central bank said (link in Chinese) on Feb. 7. Businesses’ final financing cost should be below 1.6% after receiving fiscal subsidies, it said, echoing instructions (link in Chinese) from the State Council, China’s cabinet.

On Feb. 20, the monthly updated one-year benchmark LPR dropped to 4.05% from 4.15%, which means businesses’ borrowing cost can be even lower.

To make sure the low-cost loans go where they are most needed, the National Development and Reform Commission and the Ministry of Industry and Information Technology have been compiling versions of a national white list of candidate companies, according to a government statement (link in Chinese) dated Feb. 7. Companies on the list are eligible for cheap loans from the country’s three policy lenders and six biggest state-owned commercial banks, according to the PBOC (link in Chinese). In addition, 10 provinces and municipalities, including Hubei province, the epicenter of the outbreak, can make their own lists of major local companies and designate local banks to issue such loans.

The national white list included more than 1,600 companies as of Saturday, up from the original 134 after several expansions, Caixin has learned.

In a move to expand corporate access to the loans, the central bank told the six major state banks on Monday that they can provide such loans for companies shortlisted by the 10 local governments as well, people familiar with the matter told Caixin.

A banker said the first two versions of the national list included candidate companies in need of financing to fight the coronavirus. But the list got out of whack after several expansions, the person said.

Some bank insiders became concerned that with rapid expansion of eligible firms and fierce competition among banks to offer the loans, there wasn’t sufficient supervision and management of the program, leaving it open to abuse.

These deep-pocketed conglomerates joined the wave of companies applying for the cheap loans, sparking accusations that the big companies were stealing life-saving money from smaller companies in far greater need.

On Feb. 6, Shenzhen-listed Henan Shuanghui Investment & Development Co. Ltd. borrowed 300 million yuan from Zhongyuan Bank Co. Ltd. for the production and sale of meat products, local newspaper Henan Daily reported (link in Chinese). The loan upset people because Shuanghui Investment was not short on cash. In January, the company used spare funds to purchase 1 billion yuan in investment products issued by banks, bringing its outstanding value of such investments from January 2019 to January 2020 to 4.1 billion yuan, according to a company filing (link in Chinese) to the Shenzhen Stock Exchange. In March, it invested 400 million yuan in a product issued by Zhongyuan Bank, its biggest single investment in the 12-month period, the filing showed.

Both Xiaomi and Meituan later denied that they had received cheap loans. In a response to questions from Caixin, the central bank said on Feb. 17 that banks had not granted loans to the two companies. A Xiaomi subsidiary that produces protection masks and disinfectant had applied for loans, but the amount, if approved, would be about 100 million yuan or 200 million yuan, much smaller than the reported number, the central bank said.

Still, the central bank also said that banks would grant low-interest loans to Xiaomi and Meituan as long as they used the money for business that aided in epidemic control and prevention.

Authorities said in the Feb. 7 statement that the government will revoke any company’s access to the program if they are found to have used the borrowed funds to repay other debts, invest in financial products or participate in other arbitrage activities. Authorities will recoup subsidies and loans from such enterprises and punish whoever is responsible.

In the latest move to screen out companies taking advantages of the supportive policy, government officials have booted 48, mostly state-owned, enterprises off the lists of companies eligible for the special low-cost loans, Caixin learned from sources close to banks and financial regulators. The 48 companies consist of five coal producers, five local government financing vehicles and 38 companies in the transportation sector.

The National Audit Office has dispatched representatives to financial institutions to audit and supervise the implementation of the low-interest loan program, sources with knowledge of the matter said.

In the meantime, many market participants called on the government to be more transparent and publicly disclose the lists of candidate companies as soon as possible.

Because the government has required banks to lend the funds as quickly as possible, banks have set up a special channel designed to speed up the approval process — a channel that may not subject borrowers to the usual risk control and due diligence procedures, according to an employee at a Chinese policy bank.

As the loose review criteria could allow some businesses take advantage of the program and waste funds earmarked to save lives, some bankers said banks could closely monitor businesses’ bank accounts to ensure the funds are used properly.

But others said such measures wouldn’t work and would require too much manpower to be practical.

“Controllable risks, as well as clarified uses of funds and repayment sources are the most basic requirements for banks to issue loans,” the policy bank employee said. “They can never be breached at any time.”