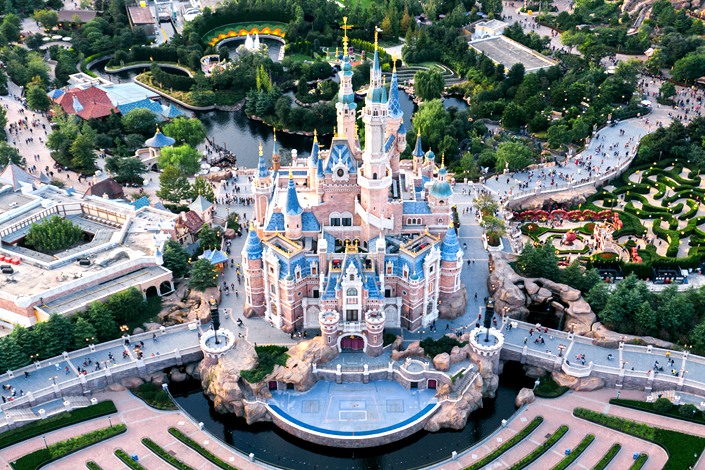 Shanghai Disneyland will reopen on May 11, the first of Walt Disney Co.'s six global Disney parks to resume business.

Walt Disney Co. said on Wednesday that it will reopen its Shanghai theme park on May 11, becoming the first of the six global Disney parks that are among its biggest profit centers to resume business as the global pandemic begins to wane.

Disney announced the decision as its executives discussed the company’s latest financial results, which included a profit plunge of more than half as its core entertainment businesses were hit by Covid-19. Disney was forced to shutter all six of its parks worldwide during the quarter, and it lost another major revenue stream as many of the cinemas that screen its films also had to close.

The company estimated the global outbreak cost it as much as $1.4 billion in profit for its latest quarter ended March 28. The lion’s share of that, about $1 billion, owed to lost business for its theme park division, according to its latest results announcement.

The Shanghai Disneyland was the first of the company’s Disney-branded parks to close on Jan. 25 as the virus spread in China after initially breaking out in the interior city of Wuhan. It closed its Hong Kong and Tokyo parks a few days later, and finally closed its remaining three parks in the U.S. and Paris in mid-March.

“We are seeing encouraging signs of a gradual return to some semblance of normalcy in China,” Disney CEO Bob Chapek said on a call to discuss the latest results, according to a transcript. “And in light of the lifting of certain restrictions in recent weeks and the successful reopening of our park-adjacent retail and food and beverage area, Disneytown, we and our government partners, Shanghai Shendi Group, plan to open Shanghai Disneyland on May 11.”

The Shanghai park’s reopening comes as China gets the upper hand on its outbreak. The nation has reported just three new cases of Covid-19 over the past two days, and last week the city of Beijing became one of the last remaining places in China to lower its local alert rating from the highest to the second-highest level.

Hong Kong also took a major step on Tuesday by announcing steps to loosen curbs on social gatherings and reopen schools, after recording no new cases in 10 of the last 16 days. But there was no word from Disney on when its Hong Kong park — which, unlike Shanghai Disneyland, is highly dependent on international visitors — might reopen.

Shanghai Disney’s reopening also comes as many of China’s other tourist attractions have begun to accept visitors again, culminating with the reopening of Beijing’s Forbidden City over the just-concluded long May Day holiday. But many restrictions remain in place at such attractions, including limits to tourist numbers, and requirements for people to wear face masks and often book visits in advance.

Disney is taking similar steps at its Shanghai theme park, which normally has capacity to host about 80,000 visitors per day. The government has requested the park initially cap the number of daily visitors at about 30% of capacity, or around 24,000 per day, Chapek said.

“We’re going to actually open up far below that just to have our training wheels on with our new procedures and processes to make sure we don’t have any lines backing up either as guests entering into the park or as they wade through the park,” he said. “So we’re going to approach that very, very slowly. But after a few weeks we will actually be up to what the government’s guideline is and at that point there could be some lifting of even those restrictions of the 30%.”

He added that all visitors and park employees, with a few exceptions of some costumed characters, will be required to wear face masks. The park will also require advance bookings, and use temperature screenings and other contact tracing and early detection systems to lower any risk of contagion.