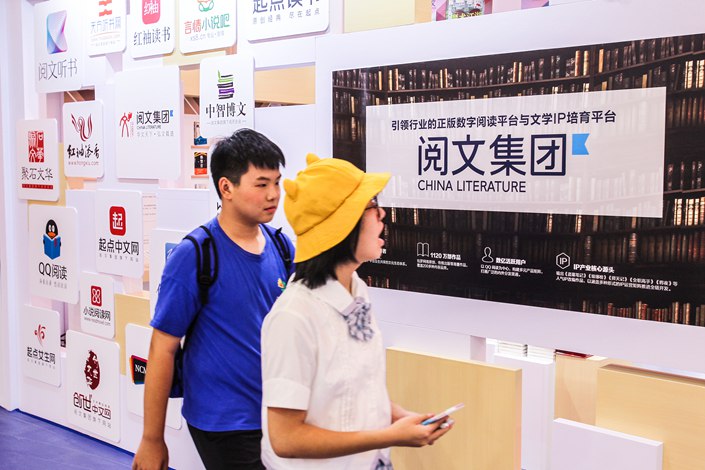 The company has faced growing discontent from its 8.1 million contributors who are increasingly unhappy about their pay.

The newly installed management team at China Literature Ltd., the online reading company controlled by internet giant Tencent, met with its top authors on Wednesday to try to diffuse compensation-related tensions in the rapidly changing industry.

The meeting comes less than two weeks after a shakeup that saw China Literature’s original management team, led by 41-year-old founder Wu Wenhui, replaced by a team of Tencent veterans. Those include new CEO Cheng Wu and President Hou Xiaonan, who led the Wednesday meeting, a company representative told Caixin.

The company has faced growing discontent from its 8.1 million contributors who are increasingly unhappy about their pay. China Literature previously derived more than 90% of its revenue from subscription fees, which it shares with its authors. But that model has changed in recent years as more companies offer their literature for free, forcing others to follow suit.

Reflecting that trend, super-unicorn ByteDance Inc., owner of the Tik Tok short video app, said last month it was making most of the novels on its popular Toutiao app free to access.

China Literature has come to rely more on fees from licensing its intellectual property (IP) to third parties, such as movie producers and game developers. But authors worry that some of their creations might be getting sold to Tencent, China’s top gaming company and 57% owner of China Literature as of the end of 2019, at below market value or even for free.

At the Wednesday meeting, the new top executives said China Literature was still considering the structure of a free-read mechanism, but stressed that paid literature offerings would be consolidated and expanded in the future. Authors were also told that they would decide which of their offerings would be free or paid. The new managers also said inappropriate places in their current contracts would be amended, and that new contracts would be introduced in the near future.

Many authors had worried about the new management team’s arrival and protested that recent contracts had imposed overly oppressive conditions in terms of their copyright ownership and the company’s free reading policies. The new management team pointed out the contentious contracts now being used had first come into effect last September — well before their arrival.

“Tencent is definitely watching ByteDance’s jump to a free app,” one industry source at another online literature company told Caixin, speaking on condition of anonymity due to the sensitivity of the matter.

The turbulence had shown up in China Literature’s Hong Kong-traded shares, which initially jumped more than 10% after word of the management overhaul came out. The stock gave back most of the gains in the days after that. But then they rallied again this week over signs that the tension might soon be settled as new management emphasized that “Authors are the foundation of the literature platform.”

“The market is looking at the exchange of IP between China Literature and Tencent. But authors and editors give an online literature company its true competitive edge, not clicks,” a senior official at a web publisher told Caixin. “After the departure of (China Literature founder) Wu Wenhui’s team, Tencent’s first consideration shouldn’t be how to utilize IP, but rather how to stabilize its team of editors and writers to guarantee its future supply of IP.