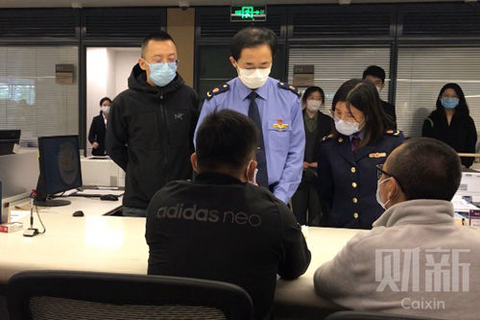 A fight for control of Bitmain Technologies Ltd., a leading maker of bitcoin mining equipment, escalated into a physical brawl Friday at a government office in Beijing as the cryptocurrency hit $10,000.

Aides of Bitmain’s co-founders got into a fight over possession of the company’s registration license. The clash attracted police to the scene. Both groups were taken to a local police station.

The power struggle started last October when Zhan Ketuan, co-founder of the largest maker of equipment to mine digital coins, was ousted by his partner Wu Jihan, who declared himself the legal representative of the company. The parties then took the dispute to the Beijing Haidian District Market Administration, which resulted in an administrative ruling granting Zhan the right to recover the company from Wu.

“The business license is company property ― how can it fall into the hands of an individual?” Liu said.

Liu was representing Wu, who was not at the scene. He was surrounded by about a dozen men. They clashed with Zhan and his two lawyers.

“People got hit,” someone shouted before the police arrived.

The confrontation took place against a backdrop if rising values for bitcoin. The cryptocurrency briefly hit $10,000 Thursday, the highest since February. The dominant cryptocurrency surged to a record high of just over $20,000 in December 2017 but collapsed to just over $3,000 a year later, according to data provider CoinMarketCap.

Bitmain at one time controlled 80% of the market for semiconductors used for mining cryptocurrencies. After its last round of private funding in 2018, the company’s value was estimate to be as much as $14 billion. The company has been on a roller coaster as the price of cryptocurrencies fluctuated wildly.

In a statement issued Friday, Bitmain blasted the market administration, saying the decision to reverse the registration was a “mistake” by the government agency that “has severely violated the company law.”

The company said it will not acknowledge any action taken by Zhan as legal representative and reserves the right to file legal claims against Zhan and related parties.

Zhan and Wu co-founded Bitmain in 2013 and rode the wave of a crypto mining boom that made them billionaires. Sources close to the company told Caixin that there were long-held disagreements between them over the growth and direction of the company and how to navigate the volatility of the cryptocurrency market. Demand went through a severe downturn after China started a crackdown on the industry in 2017.

In his motion to reinstate his position, Zhan alleged that a document Wu submitted to the Haidian District Market Administration to change the legal representative was smeared and modified, which made the registration change invalid.

But Wu’s team argued that Zhan was making a big fuss about a minor blemish in the document. Liu told Caixin that the document was modified under the direction of the staff at the Haidian market administration.

Validity disputes over document modifications are common, and a judgment needs to be made on the basis of legal facts presented by both parties, said Yin Jitao, a lawyer specializing in administrative and corporate law.