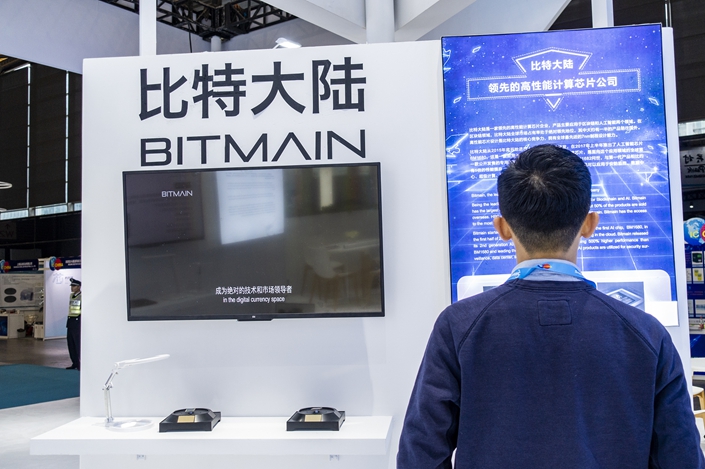 Just days after President Xi Jinping set the cryptocurrency world alight by endorsing blockchain and China’s legislature passed a new cryptography law, a power struggle at Bitmain Technologies Ltd., the largest maker of equipment to mine digital coins, has led to the ouster of co-founder and executive director Micree Ketuan Zhan.

Bitmain, whose products also form the backbone of dozens of blockchain platforms and startups, replaced Zhan, its legal representative, with fellow co-founder Jihan Wu, according to an update (link in Chinese) posted Monday to the Beijing city enterprise credit information network website, where companies provide registration and credit information.

Wu confirmed the change in an internal email to all staff on Tuesday and warned them against taking any instruction from Zhan. Referring to himself as founder, chairman, legal representative and executive director, Wu said he had decided to strip Zhan of all his positions with immediate effect, according to a screenshot of the email obtained by Caixin.

“Bitmain staff must no longer take any instructions from Ketuan Zhan or participate in any meeting organized by Zhan. Depending on the circumstances, Bitmain will consider terminating the employment contracts of anyone violating” the order, Wu wrote.

It’s not immediately clear what caused the rift between the two men, who set up Bitmain in 2013 and rode the wave of a cryptomining boom that has made them billionaires. The company hasn’t made any official statement about the changes. The current shareholdings of Wu and Zhan are not clear, but a prospectus for the company’s now shelved initial public offering (IPO) last year gave them a combined stake of just over 56%.

Sources close to the company told Caixin that there were some long-held disagreements between Wu and Zhan over the growth and direction of the company, and how to navigate the volatility of the cryptocurrency market which went through a severe downturn after China started a crackdown on the industry in 2017. Fierce competition also put more pressure on the business as smaller rivals took market share, one industry source told Caixin.

Last year, Bitmain embarked on a hiring spree as it expanded its operations but reversed course at the end of the year as the cryptocurrency market took another downturn, leading to significant layoffs and financial losses at the company.

In February, Wu founded a new company, Matrixport, a Singapore-headquartered digital financial service platform that provides trading, digital asset custody and cryptocurrency lending services. In March, Zhan and Wu stepped down as co-chief executive officers, although they remained as company directors and co-chairmen, and handed day-to-day leadership to company veteran Wang Haitao, its product engineering director. The Beijing-based group also shelved an initial public offering (IPO) in Hong Kong which was first announced in July 2018, although it has reportedly revived its plan with the aim of listing in the U.S.

Wu holds a degree in economics from Peking University and often took charge on the marketing side, while Zhan, who previously worked as an engineer at a Tsinghua University research center, was dubbed Bitmain’s “technology brain.”

Bitmain, which at one point controlled an estimated 80% of the market for semiconductors used for mining cryptocurrencies, says its chips can also be used for a wide range of other applications such as facial recognition, automatic driving, smart cities and medical devices. It also helps cryptomining companies find locations to host their machines.

The company, which was estimated to be worth as much as $14 billion when it first planned its IPO in September last year, has been on a roller coaster ride over the past 18 months as the price of cryptocurrencies plummeted. According to data provider CoinMarketCap, the price of Bitcoin, the dominant cryptocurrency, surged to a record high of just over $20,000 in December 2017 but 12 months later had collapsed to just over $3,000.

Bitcoin was trading at around $7,500 on Oct. 25 just before President Xi called for more efforts to develop blockchain technology and underscored its importance for technological innovation and industrial transformation. Within 24 hours it had surged to more than $10,000 although it has since given up some of the gains and on Tuesday was trading at around $9,460.

Canaan Creative, one of Bitmain’s main rivals, based in the eastern Chinese city of Hangzhou, filed for an IPO in the U.S. on Monday, seeking to raise $400 million.

Wu Hongyuran and Hu Yue contributed to this report.