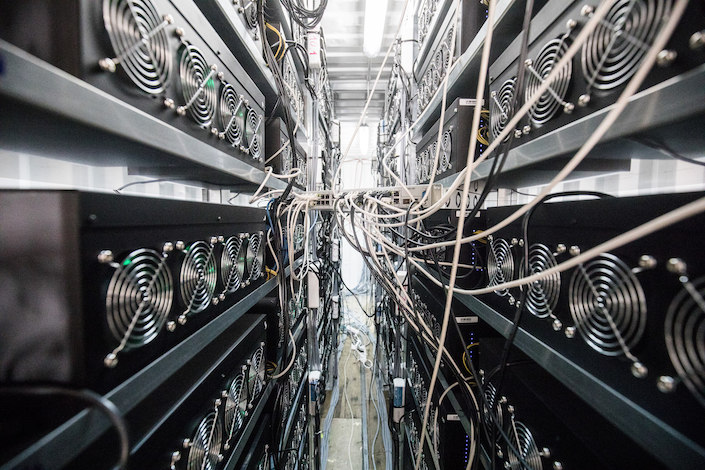 The price of Bitcoin surged past $9,700 on Friday to the highest level since March 2018. Photo: Bloomberg

(Bloomberg) — Bitmain Technologies Ltd., the world’s biggest producer of cryptocurrency mining chips, is reviving plans for an initial public offering as Bitcoin climbs to a one-year high, people with knowledge of the matter said.

The company is working with advisers on preparations for a U.S. share sale that could take place as soon as the second half of this year, the people said. Bitmain aims to file listing documents with the U.S. Securities and Exchange Commission as soon as next month, the people said, asking not to be identified because the information is private.

Bitmain, which was valued at about $15 billion in a private funding round last year, is considering reducing its earlier fundraising target because of the increased volatility in cryptocurrency prices, according to one of the people. It could raise $300 million to $500 million from the U.S. share sale, though it hasn’t finalized the amount it wants to seek, the people said.

The company was previously pursuing a Hong Kong IPO of as much as $3 billion, Bloomberg News has reported. Bitmain’s listing application lapsed in March. Smaller rival Canaan Inc. is also considering selling shares in the U.S. after dropping plans for a Hong Kong IPO, people with knowledge of the matter have said. Another chipmaker, Ebang International Holdings Inc., this week let its Hong Kong listing application lapse for a second time.

Potential IPOs by Bitcoin-related firms have spurred debate in Hong Kong, which has sought to attract more high-growth technology companies to its market while still preserving protections for the city’s legions of retail investors. Hong Kong’s stock exchange and regulators consider IPOs by cryptocurrency companies to be “premature,” the South China Morning Post reported in December, citing unidentified people.

Bitmain is preparing the share sale as the price of Bitcoin surged past $9,700 on Friday to the highest level since March 2018. The digital currency has jumped more than 160% this year, and the Bloomberg Galaxy Crypto Index, which tracks some of the largest cryptocurrencies, has doubled.

At the same time, the space is gaining acceptance from mainstream institutions. Facebook Inc. has announced that it will launch its own cryptocurrency, Libra. Companies like E*Trade Financial Corp. and Fidelity Investments are also planning new crypto trading services, Bloomberg News has reported.

Deliberations about an IPO of Bitmain are at an early stage, and details of the offering could change, the people said. A representative for Bitmain declined to comment.