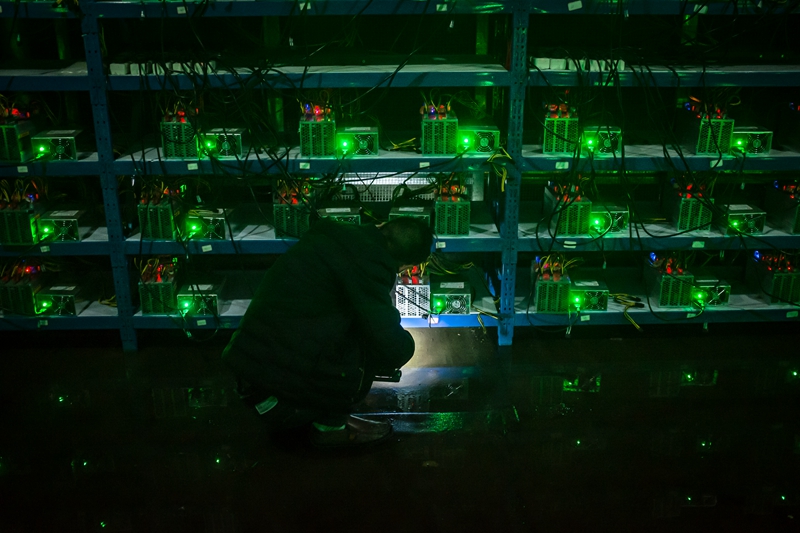 A 24-hour Bitcoin mining facility in Sichuan is seen in September 2016. Photo: VCG

The cryptocurrency market has been on a wild rollercoaster since 2017, causing cheers and tears for market players as the value of bitcoin surged from $1,000 to $19,000 and then plunged to $6,400.

While market opinions are mixed on the future of bitcoin, there is less argument in the industry that Wu Jihan and his Bitmain Technologies Ltd. are among the biggest winners regardless of the cryptocurrency market’s ups and downs.

Thanks to the crypto mining boom in China, Bitmain has expanded from Wu’s 10 million yuan startup in 2013 to an industry behemoth whose estimated valuation may top $12 billion. That makes the maker of crypto mining equipment one of the most valuable companies in the cryptocurrency world. Wu and his co-founder Micree Zhan together hold about 60% of the company, potentially making them billionaires several times over.

Wu and Zhan are moving to close a $400 million fundraising round led by Sequoia Capital China in preparation for a planned initial public offering of Bitmain in Hong Kong or the U.S.

Bitmain controls nearly 80% of the global market for crypto mining equipment – powerful computer chips and hardwares for number crunching. Cryptocurrency miners use them to solve complex math problems in verifying virtual currency transactions as part of the blockchain system of encryption, the underlying technology for cryptocurrencies. In this way, the miners earn cryptocurrency rewards.

The company also runs three of the biggest bitcoin mining collectives, in which miners combine their processing capacity and split the rewards. The collectives together control more than 40% of the world’s total bitcoin mining power.

The overwhelming presence of Bitmain has sparked criticism that it has led to increasing concentration of crypto mining capability, which is at odds with the virtual currency’s basic principle of decentralization.

Some competitors refer to Wu, a soft-spoken, baby-faced 32-year-old, as the “czar in the crypto world” for the dominance of his company. In the cryptocurrency industry, there is a theory that anyone who controls more than 51% of mining power could intervene in transactions. Bitmain is the only company believed to be close to exercising that much power. Over the years, Bitmain has seized market share quickly through acquisitions and by creating untraditional contracts to expand its market presence and consolidated its mining power.

There’s some irony in the appellation. Wu, with an economics degree from Peking University, identifies as a disciple of the 1974 Nobel economics laureate Friedrich Hayek, who advocated free markets and decentralization. Hayek was also a strong critic of dictatorship. For his part, Wu downplays his influence.

“There are many players with great influence in the industry,” Wu said in an interview with Caixin. “Power is scattered today.” Although Bitmain operates mining collectives, miners are independent players with their own free will, he said.

Wu has been an advocate of applying the decentralization of cyberspace to the real world. In a March industry conference, he argued that decentralized cryptocurrency systems will replace current monetary system to better serve people in underdeveloped countries where centralized financial systems are often plagued by poor credibility and corruption.

Despite market ups and downs, Wu says he envisions great potential for cryptocurrencies and the underlying blockchain technology.

“I believe in the next five to 10 years, blockchain will witness tens to hundreds of times of growth, not in terms of price but new applications and asset formats,” Wu said.

But the market is getting crowded, while highly volatile cryptocurrency prices and regulatory uncertainties pose risks to the business. Facing those headwinds, Bitmain has been seeking to diversify with a strong push into the flourishing artificial intelligence sector, which also demands high-powered chips. This initiative takes aim at AI chip giant NVIDIA.

But such a shift involves a different technology roadmap and requires Bitmain “to build a new ecosystem, which is quite a big project,” according to one chip industry source.

The rise of the giant

In its short history, Bitmain steered its business through market ups and downs. The company was started when bitcoin took off in 2013. It quickly won a foothold with equipment powered by high-capacity, power-efficient chips. But the market boom didn’t last long, and bitcoin prices started a decline in late 2013. The long market downturn forced out a number of players including the leading mining equipment makers HashFast and Butterfly Labs.

While most rivals scaled back in the cooling market, Bitmain continued investing in new chips and equipment. When the market revived in 2017, it quickly took a controlling share of the industry, said Li Peicai, co-founder of Shanghai-based bitcoin mining company Easy2mine.

In the market rebound, bitcoin prices surged from $1,000 to nearly $20,000. Offering the most powerful chip designed for number-crunching, Bitmain reported more than $2 billion of revenue with net profit topping $1 billion that year.

But since the beginning of this year, bitcoin’s value dropped again, to around $6,400, according to Coindesk. The bear market further hurt profits of crypto miners, which are also being squeezed as the mining becomes increasingly difficult with the amount of the currency nearing its original design limit of 21 million bitcoins, according to a crypto mining operator.

Wu said that while the current bitcoin slump has hit the industry hard, he believe it is just another business cycle.

“We have continued our research and development work to boost competitiveness,” he said. “We are waiting for the opportunity.”

Another Bitmain executive said the current market downturn is less severe than the one in 2014 and 2015, and Bitmain is still profitable selling mining gear.

Greater risks may come from the regulatory front. In 2017, the Chinese government took the lead in banning initial coin offerings —fundraisings backed by cryptocurrencies — and crypto exchanges where investors could trade virtual currencies with legal tender. The authorities’ moves took aim at spreading fraud and risky speculation related to crypto trading.

Crypto mining, although not a target of the government crackdown, also felt a chill as the central government has sent discouraging signals. Cryptocurrency mining consumes huge amounts of electricity to power computers but is deemed to make little contribution to the real economy — sectors that produce actual goods.

China has been a hub of bitcoin mining and home to nearly 80% of global mining power at the peak, thanks to incentive policies by local governments trying to boost their economies. That was especially the case  in the underdeveloped southwestern region where land and power resources are abundant.

Since last year, some local governments have scaled back incentives, such as discounts on power costs, land fees and preferential taxes. Some miners have weathered the changing environment and decided to move aboard. But others said most local governments have remained tolerant of crypto miners for the sake of local growth.

Bitmain operates mining facilities in Xinjiang, Inner Mongolia, Sichuan and Yunnan. The company has also stepped up overseas expansions with facilities in Canada and the U.S.

“We are welcomed overseas where authorities are looking for new industry growth, such as America, North Europe and Southeast Asia,” Wu said.

The future of Bitmain may lie beyond crypto mining. The company since late 2015 has started a push to develop chips for AI applications, a sector that is heavily encouraged by the government as a national strategy.

The rise of AI-related technologies such as facial recognition and autonomous driving has created increasing demand for high-powered chips. Bitmain co-founder Zhan said he sees great potential for custom chips in the AI age and hopes Bitmain can transfer its success in cryptocurrency mining to the new market.

Last year, Bitmain released its first chip designed specifically for AI applications. An upgraded version is expected to be unveiled this year.

Zhang said the company’s main revenue source is still from mining gear sales, but the funds are mainly used to support its new AI business.

Zhan said the company intends to build its AI presence from the niche market of public security, where chips are used to power smart cameras and security systems to process huge amounts of data to recognize and identify individuals, cars and other items.

Caixin learned that Bitmain has been seeking partnerships with local governments to use its technology in building smart city management systems. A first project is likely to land in Fujian province.

The AI chip market is heating up as newcomers join the race. Big tech companies including Google and Alibaba have also made forays into the new industry, fueling competition. Market research firm Tractica predicted that from 2016 to 2025, global shipments of AI chips will rise from 863,000 units to 41.2 million, pushing up chip makers’ annual revenue from $513 million to $12.2 billion, an average annual growth of 42%.

But competition is expected to be brutal. Only a few AI chip products will succeed while most startups will fail, said an Intel executive.