As Bitcoin Falls, Chinese Miners Start Turning Off Their Machines

By Timmy Shen and Wu Yujian 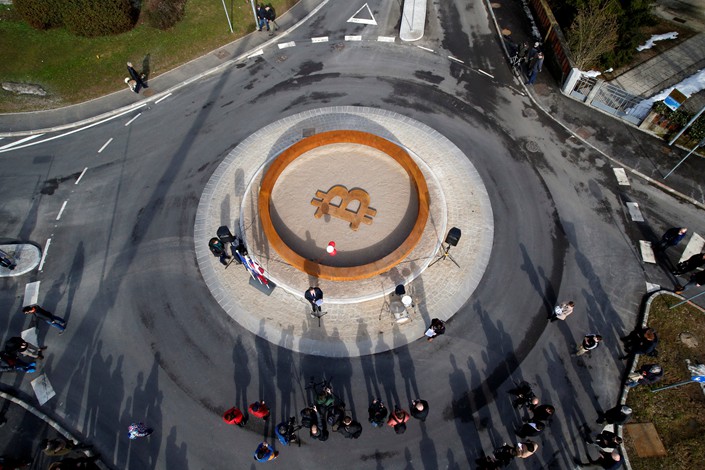 People attend the opening ceremony of world's first public bitcoin monument, placed at a roundabout in the center of the city of Kranj, Slovenia on March 13. Photo: VCG

As the price of bitcoin continues to tumble, China’s cryptocurrency mining industry — one of the world’s largest — has come under pressure with some miners suspending operations.

Bitcoin has been trapped in a downturn, with its price plumbing depths as low as $3,585 on Sunday, marking the first time the cryptocurrency has fallen below $4,000 since it first rose above it. As of late Monday in China, bitcoin was trading at $3,973, according to data provider CoinMarketCap.

The mining of cryptocurrencies requires computers that use vast amounts of processing power and electricity to solve the mathematical puzzles that power a cryptocurrency’s network. For their efforts, miners are rewarded in new “coins,” which can then be converted into hard currencies on overseas platforms.

Due to China’s abundant and cheap supplies of electricity in some regions, the country’s cryptocurrency mining industry has flourished. However, the profitability of cryptocurrency mining depends on the market value of the currency as well as the cost of electricity. In an exchange filing, BitMain, which makes the powerful computers that companies use to mine cryptocurrencies, said one of the major risks to its business was its “ability to access large quantities of power at reasonable costs.”

Some miners in China have halted operations as the price of bitcoin has dropped below the “shutdown price,” said a source close to the matter who preferred anonymity. The term refers to the price at which mining a cryptocurrency is no longer profitable.

As of Monday, bitcoin has fallen below the “shutdown price” for miners using specific kinds of equipment, such as the Bitmain Antminer S7, the Avalon Miner A741 and the USED Whatsminer M3+ (lower-frequency version), as suggested by F2pool (link in Chinese), one of the largest mining pools in China. These thresholds were calculated based on the assumption that the miners are paying 0.4 yuan ($0.05) a kilowatt-hour for electricity.

“We have yet to switch off our machines as we also offer financial products to help clients control for such risks,” said Evan Yu, chief operating officer of miner community Mining Sea, which runs cryptocurrency mining units in Yunnan and Sichuan provinces and the Inner Mongolia autonomous region. He didn’t specify what those other financial products were.

Yu said that his mining units are likely to remain in operation, and the machines could possibly “acquire more coins as others have temporarily stopped running their machines.”

Amid bitcoin’s crash, some in the cryptocurrency market have fled to the perceived safety of stable coins, which are cryptocurrencies pegged to a comparatively stable asset, like the U.S. dollar. Tether is one example. A single Tether token can be redeemed for $1, according to the Tether platform.

“Stable coins are traded and used as an approach to control risks generated by cryptocurrencies such as bitcoin,” Yu said.

However, stable coins have not always been stable. Tether’s price fell to an 18-month low of $0.92 a token in October before recovering, according to CoinMarketCap, showing that distrust in the digital token is growing.

Chinese regulators have also tried to get a tighter grip on the cryptocurrency sector. In September, China became the first country to ban fundraising for new blockchain-based cryptocurrencies, a practice known as “initial coin offerings” (ICOs). The prohibition came after the central bank and six regulatory bodies deemed such deals illegal. The central bank also warned of “obvious bubbles” in blockchain-related financing and investments involving cryptocurrencies, especially ICOs.