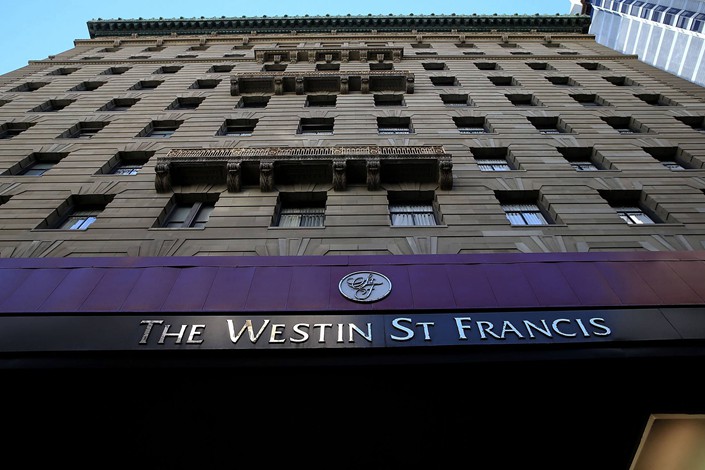 A sign is posted on the exterior the Westin St. Francis hotel on November 16, 2015, in San Francisco, California. Photo: Bloomberg

Dajia — which assumed the assets of struggling Chinese insurer Anbang Insurance Group Co. — said it has satisfied all terms of the sale. But Mirae cited a myriad of reasons why it can’t close, including hotel shutdowns caused by the Covid-19 virus, according to court filings.

Laster will preside over the trial in Wilmington, Delaware, to determine whether Mirae stated proper grounds to pull out of the deal. Anbang acquired the portfolio via its acquisition of Strategic Hotels & Resorts Inc.

Richard Edlin, one of Mirae’s lawyers, said the deal can’t close yet because there are questions about the title to some hotels and the value of the properties has been eroded by the coronavirus. A dramatic drop off in travel has left two of the hotels closed, while others have almost no guests, he said.

“We’re the innocent party” in the dispute, Edlin said.

Dajia attorney Adam Offenhartz countered that the Korean company was “grasping at straws” to come up with pretexts for calling off the deal and shouldn’t be allowed to get away with it.

The real question the judge must answer is whether Dajia’s reaction to the pandemic — including closing some hotels — violates terms of the deal, which require operating the properties “in the normal course” prior to closings, Offenhartz said.