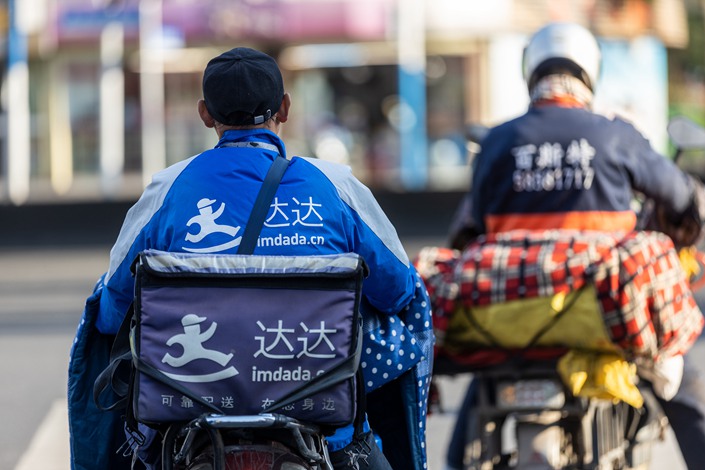 Dada connects shoppers with merchants through the JD Daojia app, where consumers can get their groceries and fresh food delivered within one hour of placing an order.

The company said in a prospectus filed to the U.S. Securities and Exchange Commission on Tuesday that it would seek as much as $100 million. But the company could raise that target to over $500 million, said a company source who asked not to be named because the information has not been disclosed.

Dada, which is one of China’s largest online grocery platforms and has partnered with major supermarket chains including Walmart Inc., has been weighing a U.S. listing since 2018, the source said.

The company will invest the proceeds in research and development, and in marketing to grow its user base, as well as using some for general business purposes, the prospectus said.

Founded in 2014, Dada began as a logistics specialist offering short-haul intra-city delivery services. In 2016, it acquired JD.com Inc.’s JD Daojia, one of China’s early grocery delivery units. The company, which is more familiar to many Chinese as Dada-JD Daojia, counts JD.com as its largest shareholder with a 51.4% stake. In the year to March around 30% of JD Daojia’s user traffic came from JD.com, according to the prospectus.

Similar to online retailers like Instacart in the U.S., Dada connects shoppers with merchants through the JD Daojia app, where consumers can get their groceries and fresh food delivered within one hour of placing an order. U.S. retail giant Walmart has invested nearly $400 million in the company and is its second-largest shareholder with a 10.8% stake.

Increasing smartphone penetration and the growing popularity of delivery services in China have helped Dada’s revenues grow rapidly over the past few years, from 1.2 billion yuan ($169 million) in 2017 to 3.1 billion yuan in 2019.

But the company has accumulated huge losses, including from costly subsidy programs to lure merchants and users away from deep-pocketed rivals like Meituan and Alibaba. In 2017, it reported a net loss of 1.4 billion yuan, and last year one of 1.7 billion yuan.

Dada’s IPO plan comes as China’s grocery retail industry is emerging from the months-long Covid-19 crisis, which has been largely brought under control in the country. While it has taken a terrible toll on human life, online retail is one of a handful of industries to have benefited from measures taken to control the epidemic, as people confined to their homes relied on such services to supply their daily needs. During the first three months of this year, Dada posted revenues of 1 billion yuan, more than double those for the same period last year.

Dada’s listing is being underwritten by Goldman Sachs, BofA Securities and Jefferies, according to the prospectus.