By Flynn Murphy, He Jingwei and Di Ning 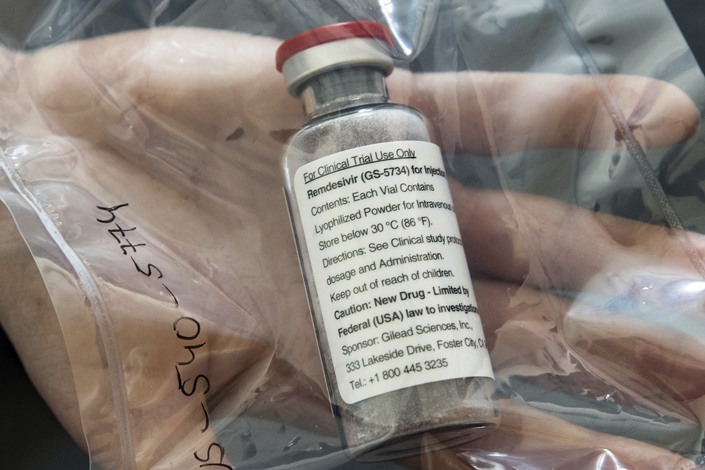 Gilead originally developed remdesivir as an Ebola treatment, but later repurposed the drug for use against the virus that causes Covid-19.

Gilead Sciences Inc. has announced deals with four generic-drug makers in India and one in Pakistan to scale up production of its experimental coronavirus treatment.

Under the terms of the deals, Gilead will give the companies access to the technology used to manufacture remdesivir, allowing them to supply 127 mostly low- and middle-income countries with the drug.

The companies will not need to pay Gilead royalties until the WHO declares the pandemic over, or other drugs or vaccines are approved for the treatment of Covid-19, Gilead said in a statement announcing the deals on Wednesday.

Granting such licenses on a novel drug is rare but not unprecedented. In 2005, as H5N1 bird flu was spreading worldwide, pressure grew on Switzerland’s Roche Pharmaceutical Group to grant production licenses to other companies to make Tamiflu, which was considered the most effective drug. Roche licensed Hyderabad-based Hetero to make and sell it in the local Indian and other developing markets.

Gilead has previously authorized Indian pharmaceutical drugs to copy its groundbreaking but prohibitively expensive Hepatitis C cure Sofosbuvir, sold as Sovaldi. Gilead granted Indian companies the right to produce and supply generic sofosbuvir for a fraction of the price in some markets.

Gilead has not disclosed a formal pricing plan for remdesivir, but said the licensees had set their own prices. On May 1, the U.S. Institute for Clinical and Economic Review released pricing studies estimating the lowest cost recovery price for the drug was $10 per 10-day course, but said $4,460 was the ceiling at which “the health benefits for patients can be rewarded without overspending in a way that leads to unintended greater loses of health.”

But the AIDS Healthcare Foundation (AHF) said in a statement Sunday that the drug should be priced at no more than $1 per dose, based on a University of Liverpool research study which found the estimated cost of production of the drug was $0.93 per day.

Gilead’s remdesivir was originally developed as an Ebola treatment, but the drug was unsuccessful, and the company later repurposed it for use against the virus that causes Covid-19.

The AHF also called on Gilead Sciences to disclose any public research and investments involved in the development of remdesivir, as well as its development costs.

“The U.S. taxpayer paid for the research for this drug. Medicaid and Medicare are very likely going to pay for the prescriptions for this drug in the United States,” said AHF President Michael Weinstein. “Full disclosure” was needed of how much the U.S. public had contributed to the costs of its development, he said.

Weinstein was referring to a report from STAT News that the U.S. federal government had contributed research and lab time to the development of remdesivir.

Demand for Gilead to expand production comes despite mixed trial results and a lack of evidence remdesivir is of significant benefit to Covid-19 sufferers. A patchwork of research on the treatment has been published showing mixed results, including a troubled Chinese trial which concluded it was of little use.

Meanwhile, a U.S. National Institutes of Allergy and Infectious Disease trial showed remdesivir reduced the median recovery time of hospitalized Covid-19 patients from 15 to 11 days. The results were announced in a press release on April 29, but the full data has not been released.

Remdesivir was issued an Emergency Use Authorization by the U.S. Food and Drug Administration to treat Covid-19 patients on May 1. It was approved in Japan on May 7.

Chinese pharmaceutical companies Borui Bio-Pharmaceutical and Hainan Haiyao have previously made bold but untested claims about being able to copy and produce remdesivir at scale.

On Jan. 21, the Wuhan Institute of Virology controversially applied for a Chinese patent for the use of remdesivir to treat coronavirus, saying it did so to “protect the national interest.” Gilead responded in February that it was too early to discuss patents for the drug.