By Flynn Murphy, Di Ning and He Jingwei 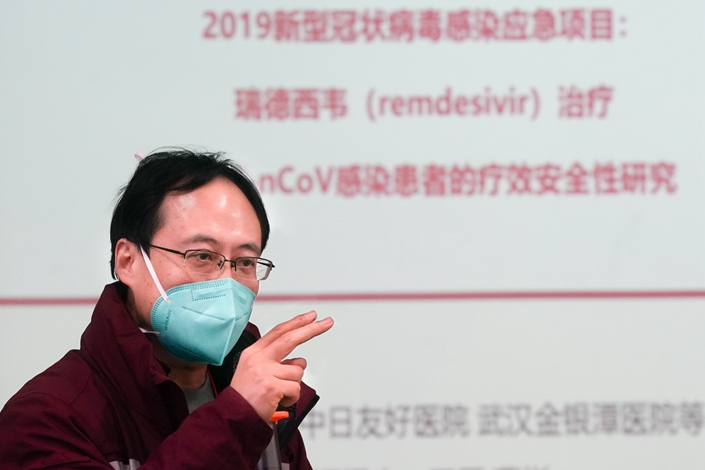 A patchwork of research on Gilead Sciences Inc.’s experimental coronavirus treatment published a day ahead of the company’s first-quarter earnings call has buoyed markets and left the drug’s approval by U.S. regulators near certain, even as experts point to deficiencies in the evidence underpinning it.

Not one but three different sets of trial results were published Wednesday — two reporting positive findings and one reiterating that the drug appears to have little benefit.

Hopes for remdesivir, which was repurposed from a failed Ebola treatment, hit a low ebb last week when the World Health Organization accidentally leaked research that found it was of little help to Covid-19 patients. The disappointing results, from two closely-watched Chinese trials led by high profile doctor Cao Bin, was finally published in the peer-reviewed journal the Lancet Wednesday.

But the same day, press releases from the National Institutes of Allergy and Infectious Disease (NIAID) in the U.S. and from Gilead itself announced that their own trials had drawn more positive conclusions.

All three sets of trials are in some way flawed. Only the Chinese trial has been peer reviewed, and it is the most scientifically rigorous, despite being carried out in the medical equivalent of trench warfare conditions at Covid-19’s ground zero of Hubei. They found the drug did not improve the condition of patients or reduce the amount of virus in their bloodstream, though the researchers said more data were needed to work out if starting treatment earlier would benefit patients.

But that trial was cut short, and recruited only 273 patients of a target 453, leaving their conclusions unreliable, partly because of their high standards for inclusion and partly because China’s coronavirus outbreak was brought under control. “Stopping early gives an underpowered trial, which taken alone, gives inconclusive findings,” said John Norrie, a professor of medical statistics and director of the Clinical Research Center at the University of Edinburgh, in an accompanying review in the Lancet.

Also on Wednesday, NIAID released preliminary data from their own clinical study of the drug, saying in a press release it had cut the median recovery time of patients with advanced Covid-19 by 31% to 11 days, compared with 15 days for those who received a placebo. The trial included 1,063 patients.

The results also suggested it improved mortality by a whisker — 8% of patients given remdesivir died, compared with 11.6% for the placebo group — but experts told Caixin the difference could be too small to be meaningful.

NIAID said it would publish comprehensive data in a forthcoming report, though its press release left no confusion about regulatory support for the drug, saying the FDA had been in “sustained and ongoing discussions with Gilead Sciences regarding making remdesivir available to patients as quickly as possible, as appropriate.”

Separately, Gilead released its own research on 397 patients, half of whom were given a 10-day course of remdesivir and half a five-day course. The research found similar levels of improvement for the two groups, but found those treated within 10 days of developing symptoms were likely to be discharged earlier. The study had no placebos or control group.

Karen Anderson, a senior healthcare analyst at U.S. financial services firm Morningstar, said there was a “100% probability” remdesivir would be approved to treat Covid-19 in the U.S. in a Wednesday note.

"I think it’s going to get an emergency use authorization, I think the FDA is probably going to move ahead with that," former FDA commissioner Scott Gottlieb told CNBC on Wednesday.

Remdesivir is being backed at the highest levels of the U.S. administration, with President Donald Trump reportedly saying at a White House meeting Wednesday he wants the FDA to move “as quickly as they can” to approve it.

Anthony Fauci, the head of NIAID, said alongside the president Wednesday that the findings were “quite good news,” according to Bloomberg.

“What it has proven is that a drug can block this virus,” Fauci said. “This will be the standard of care.”

Fauci said the impact on recovery times was “highly significant.” He also took a shot at the Lancet paper, saying it was “not an adequate study.”

The White House announcement was “clearly preliminary and may have been precipitated by the accidental disclosure of the results (from the Chinese trial) by the WHO on their website,” said Phillip Reece from the ARC Centre for Personalised Therapeutics Technologies in Melbourne, who consults for the pharmaceutical industry.

“Following reports that hydroxychloroquine and combinations of HIV protease inhibitors do not seem to be effective against COVID-19, remdesivir stands alone at this time as the only antiviral drug to be potentially useful in treating patients with COVID-19 infections.”

Cao Bin, who led the Chinese trial published in the Lancet on Wednesday and another aborted trial on less severe cases of Covid-19, has weighed in, telling Caixin his team’s research was “basically incomparable” to the U.S. trials because they were measuring different outcomes.

But he said the Chinese trial were more rigorous. “Ours was more recognized and stricter,” he said, referring to their use of ‘quadruple blinding’ and strict placebo controls so as not to bias the results.

Responding to comments about the Chinese trial’s low enrollment rate and unclear conclusions, Cao said if remdesivir was really a “magic drug,” the results would have been easy to spot in a placebo controlled trial.

“Two-hundred-and-seventy-three patients is not too few … if the difference between (the placebo and active drug) is large it can be seen no matter how they are compared.” Cao said his studies did suggest a slight difference between remdesivir and placebo. “But if you want to prove this weak difference, you need a larger, very large sample size ... but how small this difference is, we don't currently know.”

He said his team made the decision to abort its remdesivir trials owing to early data and the opinion of the trial’s safety committee, as well as the fact that patients meeting the inclusion criteria had dried up by early March. But he said that did not mean the findings were not valid.

In his accompanying Lancet review, Norrie, the medical statistics professor, said though rigorous clinical trials were difficult to do in a pandemic, the “temptation to lower the threshold of convincing evidence must be resisted, because adopting ineffective and potentially unsafe interventions risks only harm without worthwhile benefit, while making it even harder to undertake trials to find truly effective and safe interventions.”

Gaetan Burgio of the John Curtin School of Medical Research at Australian National University said the mix of results from the U.S. and China suggest remdesivir may improve clinical outcomes, but show it is “not a silver bullet against Covid-19.”

“It is therefore more critical than ever to keep social distancing, wearing masks or follow other preventive measures to limit the spread and eliminate the virus,” Burgio said.