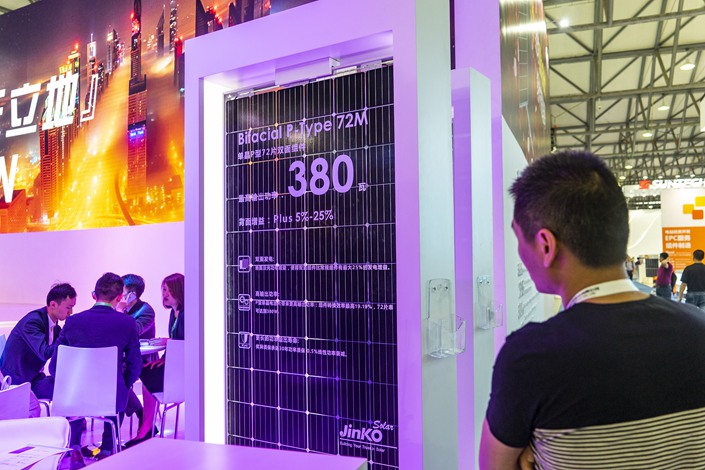 In addition to coronavirus-related delays in solar project bidding and construction, Jinko Power suffered a net loss of 24.3 million yuan in the first quarter of 2020.

Trading of Jinko Power shares was halted for 30 minutes after a 20% spike in prices triggered a circuit breaker as the exchange opened. Trading resumed until the stock was suspended for a full day after hitting the 44% upper limit enforced by the Shanghai Stock Exchange for initial public offerings.

Founded in 2011, Jinko Power was until 2016 a subsidiary of JinkoSolar Holdings Co. Ltd., a New York-listed firm chaired by Li Xiande, when JinkoSolar sold 55% percent of the company to another company run by Li, Jinko New Energy Group Co. Ltd., with an eye towards conducting an IPO on the Chinese mainland.

Jinko Power is not the first Chinese solar firm to delist abroad in exchange for a domestic IPO. JA Solar Technology Co. Ltd. left the Nasdaq in 2018 in order to list on the Shenzhen bourse, while Trina Solar Ltd. is seeking a Chinese IPO after leaving the New York Stock Exchange in 2016.

One investment banker told Caixin that one motivation for the companies is gaining market capitalization, as Chinese solar enterprises listed in the United States are usually valued at lower prices there than at home.

Jinko Power issued 595 million shares at a price of 4.37 yuan ($0.6) each, according to its prospectus, netting 24.1 billion yuan for the company. Some 78.8% of the funds will go to three solar power projects in Liaoning and Jiangsu provinces, while the rest will be used to repay bank loans.

The solar power giant saw a 24.4% drop in revenue to 5.34 billion yuan last year, pulling its profits down 19.2% to 730 million yuan, according to the company’s listing announcement (link in Chinese). The slump was attributed to a reduction in solar power station bidding and construction activity in 2019, due partly to delayed rollout of state subsidies.

In addition to coronavirus-related delays in solar project bidding and construction, Jinko Power suffered a net loss of 24.3 million yuan in the first quarter of 2020, although its losses narrowed 67.51% year-on-year.

The investment banker suggested costs associated with new power stations could have piled up without generating much income in their first few months of operations, leading to a loss on the company’s balance sheet.

Despite dwindling profits, Jinko Power managed to lower its debt to asset ratio from 83.54% in 2016 to 72% last year, according to the announcement.