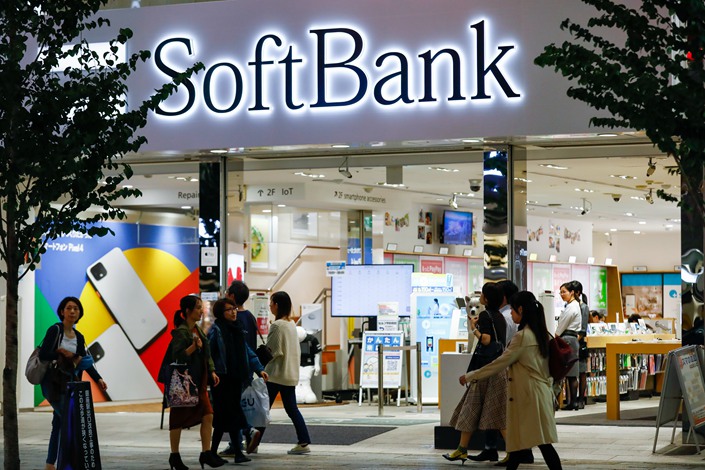 “To have some cash on hand, we will pare down our assets,” CEO and Chairman Masayoshi Son told a news conference.

SoftBank will use derivative contracts to be settled in a few years to raise cash from its stake in the Chinese e-commerce group.

While SoftBank appears to have no immediate cash flow problems, its Vision Fund, which had driven earnings growth, has seen the value of some of its tech investments fall.

On Monday, SoftBank reported a 1.43 trillion yen net quarterly loss after big bets on real estate and ride-sharing misfired during the coronavirus pandemic.

Son warned on Monday that the titan might not pay a dividend next year after its largest ever annual loss as a public company. He told investors to expect a clutch of business failures within the Vision Fund, a $100 billion vehicle backed by outside investors.

“About 15 of 88 companies [in the Vision Fund] may go bankrupt. Another 15 will grow significantly. The remaining will be so-so,” Son said.

“Unicorns are falling into the corona[virus] valley,” said Son, referring to the nickname for valuable tech startups.

The coronavirus pandemic has added to the problems facing SoftBank and Son over some of its investments such as WeWork, the U.S. shared working space company, which failed to complete an IPO last year.

Earlier on Monday SoftBank said Jack Ma, the Alibaba Group Holding co-founder and a longtime collaborator of Son’s, would leave its board after 13 years. The Japanese tech conglomerate is the largest investor in Alibaba.

SoftBank posted a 1.1 trillion yen loss at the Vision Fund in the three months to the end of March because of the falling value of investments. It also booked a 537 billion yen loss on a separate vehicle that invests in WeWork.

The Vision Fund’s real estate investments — including U.S. companies OpenDoor labs and Compass as well as WeWork — and transportation and logistics investments, which include ride-hailing companies Uber Technologies, Didi Chuxing and Grab, were hit particularly hard. The fair value of the two segments fell by $3.3 billion and $2.8 billion from December, respectively.

WeWork was valued at $2.9 billion at end of March, SoftBank said, compared with $7.3 billion in December and $47 billion at its peak before its aborted IPO.

SoftBank reported a net loss of 961 billion yen for the year ended in March, having previously warned investors to expect an annual loss of around 900 billion yen.

Son, also SoftBank’s chairman, founder and largest shareholder, has pledged to shore up its balance sheet with 4.5 trillion yen of asset sales, using the proceeds to buy back shares and cut debt to try to restore investor confidence.

“During the Great Depression, stock prices fell to one-tenth. It took 25 years to recover. Coronavirus is a similar event: an unprecedented crisis,” he warned.

But he said he was confident of completing asset sales.

“I have spent a long time as an entrepreneur. After the collapse of the dot com bubble, I was on the edge of the cliff, supporting myself with two fingers. This time, 4.5 trillion yen can be certainly monetized,” he said.

SoftBank’s stakes in Alibaba and in T-Mobile, the U.S. unit of Germany’s Deutsche Telekom, are worth more than $150 billion. SoftBank merged its Sprint unit with T-Mobile in April.

Asked whether he is considering selling the stake in T-Mobile, Son said he is “anticipating a lot of synergies from the merger” but added that he is “considering various options as to how to achieve financing.”

Investors in SoftBank are waiting to see what the uncertainty around the coronavirus pandemic will mean for the Vision Fund’s ability to carry out more IPOs or asset sales. The fund pays a fixed 7% distribution to outside investors every year, adding to pressure on SoftBank to generate cash from successful exits from the investments.

Son said he would not ask partners for more investment funds given the poor returns.

“New investment continues with SoftBank’s own money. [The performance] is not something we can be proud of, so we will refrain from raising funds from the other partners we originally planned for, and continue with our own money. The fund cannot raise funds if the grades are poor. It’s unpopular. I’m sometimes asked if it’s okay. It’s not okay,” Son said.

SoftBank said the sharp decline in WeWork’s valuation reflected a lower multiple used to calculate its terminal value, as well as a higher discount rate on its unsecured notes, due to the impact of the coronavirus outbreak.

SoftBank is embroiled in a legal fight with WeWork directors after it said this year that it would no longer go ahead with parts of a proposed bailout for the company.

On Monday, SoftBank also named three new directors, two of whom are independent, amid calls from an activist investor to boost shareholder returns and strengthen corporate governance.