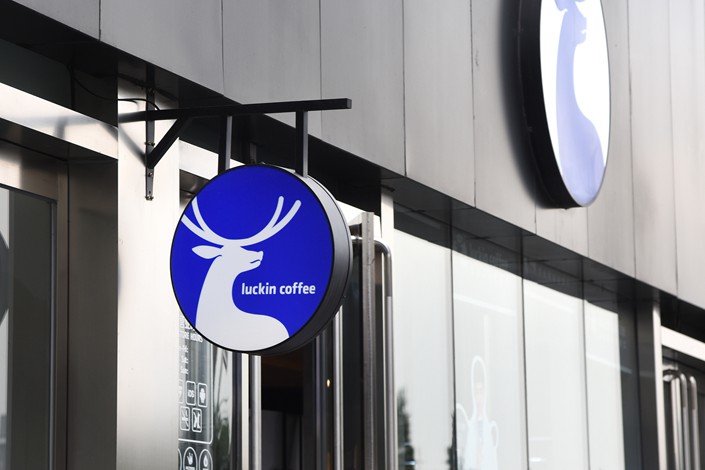 From no stores less than three years ago, Luckin built up an empire of 4,507 shops in China as of early this year, officially eclipsing Starbucks.

Luckin Coffee Inc. has been in near-nonstop headlines since early April when it first disclosed an internal investigation had uncovered a massive cooking of its books to the tune of more than $300 million in fake revenue in the final three quarters of last year. In the latest development of its rapid unraveling, Luckin said on Tuesday it had been notified that the Nasdaq, where its shares are traded, was planning to delist the company.

Below, Caixin answers five questions to help readers understand the rapid rise and fall of this company, and why it has garnered so much global attention.

Why all the fuss about such a small and relatively young company?

Luckin’s youth and explosive growth, coupled with a savvy publicity campaign, drew huge attention to the company nearly from its inception in 2017. From the outset, Luckin positioned itself as a high-tech rival to Starbucks, the latter of which first came to China two decades ago and had built up a network of 4,300 stores at the start of this year. In 2018, shortly after opening its own first stores, Luckin even sued Starbucks for unfair competition after alleging its much larger peer was using its muscle to pressure landlords to reject lease applications for new Luckin stores.

From no stores less than three years ago, Luckin built up an empire of 4,507 shops as of early this year, officially eclipsing Starbucks. It used a model of minimalist shops that were far smaller than its U.S. rival’s with little or no seating, and app-only ordering to give it a high-tech flavor. The company also became famous for heavy discounts, leading many to wonder how it could ever earn a profit.

The company also became a corporate wunderkind when it launched its IPO a year ago, just a year and a half after opening its first shops. Undeterred by its huge losses, investors bought into the $500 million offering and at one point bid up the company’s stock to as much as $50 — near triple its IPO price of $17. Luckin’s American depositary shares tumbled more than 80% in the days immediately after the company revealed the fraud on April 2, and were suspended a short time later. Trading is set to resume on May 20.

How was the fraud uncovered, and what kinds of investigations are underway?

The fraud disclosure saga dates back to late January, when an anonymous report began making the rounds accusing the company of inflating its number of items sold per store each day by 69% in last year’s third quarter and 88% in the fourth quarter. That report got a big boost when it was publicized by famous short seller Muddy Waters.

One of China’s biggest concerns has been how the Luckin case has damaged investor confidence in listed Chinese companies, both at home and abroad. Such companies have long been a favorite target of short sellers due to their frequently aggressive accounting practices, and similarly aggressive practices aimed at boosting numbers for everything from active users to clicks and sales.

Who has been punished so far, and what other actions has the company taken?

The company made a major move last week when it fired its CEO Qian Zhiya, who also goes by Jenny Qian, as well as COO Liu Jian. It had originally pinned the blame on Liu and some of his underlings and suspended them in April pending the outcome of its internal investigation. A source close to the company told Caixin that Luckin founder Lu Zhengyao, who also goes by Charles Lu, has denied any knowledge of the fraud, and that no evidence has been found to implicate him. But evidence uncovered in the investigation showed that Qian may have participated in the fraud, the source said.

In the early hours of Wednesday morning, Lu broke his silence of more than a month by issuing a personal statement. He said Luckin had concluded its preliminary investigation and held those responsible accountable, reorganized its board and updated its management team. But he expressed his regret and disappointment that the Nasdaq’s delisting notification had come before the company concluded its investigation. He also emphasized that the more than $1 billion raised by Luckin in its short lifetime wasn’t part of a bigger fraud to benefit him personally, and that nearly all the money had gone into the company.

What kind of legal liabilities does Luckin face?

Luckin is currently facing liability on three fronts. The largest could come from a flood of class-action lawsuits that were announced against the company shortly after its original disclosure of the fraud.

The company is also facing a lawsuit by 14 funds in Hong Kong that hold Luckin bonds, according to the local court’s website. Defendants named in the lawsuit include Cayman Islands-registered Luckin Coffee Inc., the main vehicle for the company’s U.S. listing, as well as four other entities registered in Hong Kong. Conditions in the claim suggest the 14 companies hold about $161 million worth of Luckin’s convertible bonds. In January, Luckin raised $400 million through a convertible bond offering.

What’s the likely timeline for the Luckin’s delisting, and what else might be next for the company?

A notification received by Luckin on May 15 said the company could be delisted from the Nasdaq for violating two of the exchange’s rules, one involving public interest concerns and the other for failing to disclose material information. Luckin said it plans to request a hearing on the matter, and that such a hearing typically occurs within 30 to 45 days of making such a request.

The claims against the company, combined with the damage to its credibility, are likely to put it under intense pressure to meet its existing financial obligations in the months ahead. In its last quarterly filing before the scandal, Luckin reported a loss of 2.3 billion yuan for the first nine months of last year, up from a 1.7 billion yuan loss a year earlier. The filing said it had roughly 5.5 billion yuan worth of cash equivalents and short-term investments at the end of last September.

A previous version of this story incorrectly named the company that was sued by Haode Investment. It was Credit Suisse.