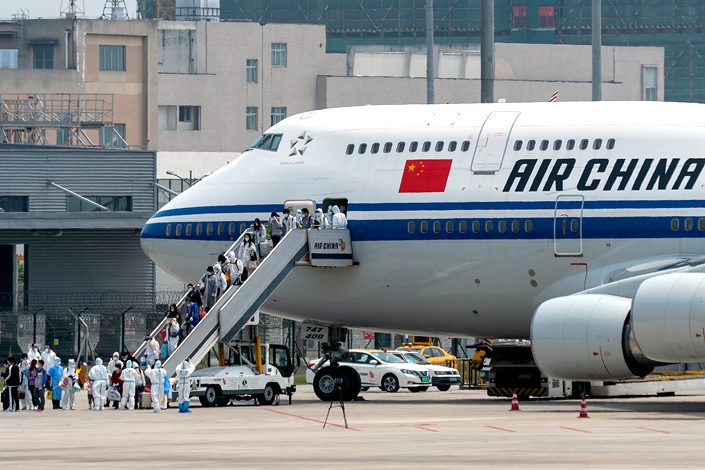 American officials have said the reason for ongoing delays in passenger flights from the U.S. to China is because Chinese authorities are submitting the relevant paperwork without enough notice.

Logistical issues between Chinese airlines and American transport authorities are hindering efforts to bring home Chinese students from the U.S., officials from both countries have said.

Delays to chartered repatriation flights are due to Chinese carriers submitting charter applications “with little to no notice before proposed flight operation,” a spokesperson from the U.S. Department of Transportation (DOT) told Caixin in an email.

The comments come after China’s foreign ministry said Tuesday that the flights were delayed because the U.S. had not approved the flight plans and urged Washington to fast-track the procedures.

China, which first detected the deadly new coronavirus late last year, has largely managed to contain its Covid-19 epidemic. In recent weeks, the country has sought to evacuate certain citizens from countries with severe outbreaks.

One group is primary and secondary school students in the United States, which has logged the most cases of any country in the world. Around 42,000 students under the age of 18 attended American schools in 2018, according to a January report by the Student and Exchange Visitor Program, a body affiliated with U.S. immigration authorities.

So far, however, several planned flights have been unable to take to the skies. An Air China flight scheduled to depart at 1:10 p.m. Tuesday from Houston to the northern Chinese city of Tianjin remains grounded. China’s consulate general in Houston said (link in Chinese) Monday that the plane was likely to be delayed as it had not yet received approval from the U.S. government.

A similar fate has befallen a China Eastern flight from Chicago to the northern Chinese city of Taiyuan that was also scheduled for departure Tuesday. Another Air China flight from New York to Chongqing was initially delayed, but has since arrived in the southwestern Chinese metropolis.

At a regular press briefing Tuesday, Chinese foreign ministry spokesperson Zhao Lijian said the postponements were regrettable partly because some passengers had already moved out of school accommodation to catch the flights. China hoped the U.S. would expedite the approvals “out of humanitarian spirit,” he added.

But a DOT spokesperson said Chinese authorities and airlines were aware that such chartered flights typically have “significant” lead times. The department was processing applications according to regulations requiring a sufficient public comment period, as well as the obligations of an air transport agreement between the U.S. and China, they added.

China arranged (link in Chinese) eight temporary flights to bring home more than 1,500 primary and secondary school students from America between April 11 and May 2, according to China’s embassy in the United States.