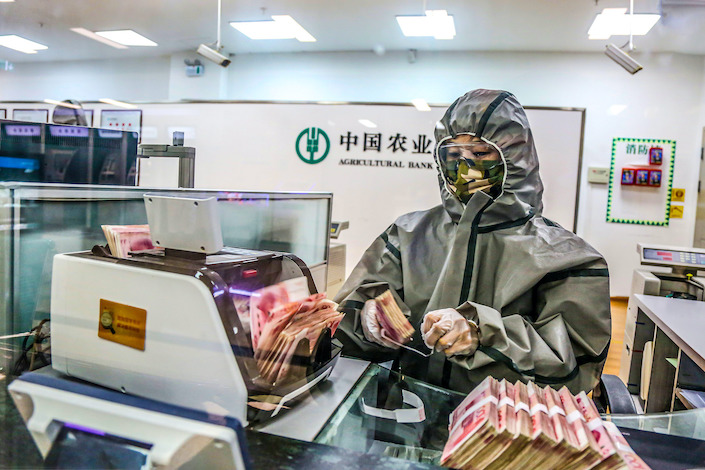 A teller wearing protective gear March 7, 2020, at a branch of Agriculture Bank of China in Harbin.

Profit growth at China’s listed banks continued a downward trend in the first quarter, hurt by heightened macroeconomic uncertainties and the Covid-19 pandemic, according to a report Wednesday from a global consulting group.

First-quarter profit growth was boosted by expansion of banks’ assets through increased lending in support of businesses to recover from the pandemic and slower expense growth reflecting decreased travel and marketing costs, according Steve Xu, partner of financial services at Ernst & Young.

Meanwhile, nonperforming loan ratios didn’t rise significantly. The nonperforming loan (NPL) ratio of China’s commercial banks climbed to 1.91% at the end of March, up 0.05 of a percentage point from the end of December and marking the highest level since March 2009, according to data from the China Banking and Insurance Regulatory Commission (CBIRC).

In the first quarter, banks increased loan-loss provisions by 17% over the same period last year to 4.8 trillion yuan ($676.7 billion), but Ernst & Young said the increase wasn’t as sharp as for some banking peers in the U.S.

The five biggest U.S. lenders stashed away $24 billion of loan-loss provisions in the first quarter, almost five times as much as in the previous period.

Some analysts are worried that Chinese banks might not have prepared enough for a potential tsunami of bad loans. Ernst & Young’s Xu said the more moderate increase in Chinese banks’ loan-loss provisions reflected different stages for China and the U.S. in the pandemic. The outbreak is largely under control and economic activities have gradually resumed in China, while the epidemic is still raging in the U.S., he said.

Some banks had larger increases in loan-loss provisions in 2018 because of strict implementation of bad loan classifications or in compliance with a new international financial reporting standard requiring a change in impairment calculations.

As banks defer certain loan repayments as part of efforts to support businesses after the pandemic, the NPL ratio may further increase in the second half but overall is still under control, Xu said.