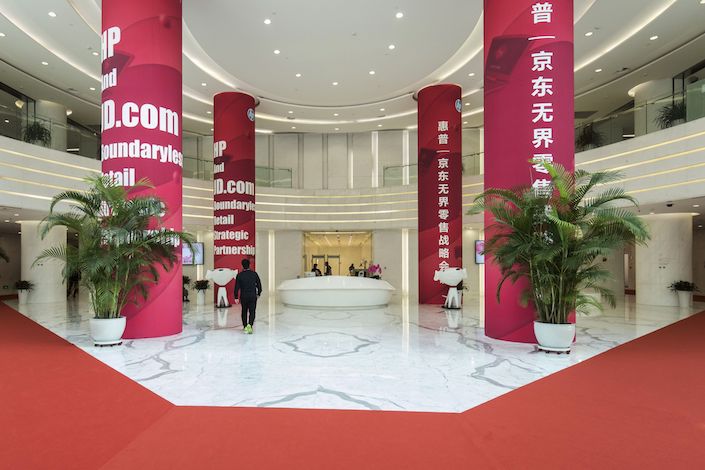 A man walks through the reception area at the JD.com headquarters in Beijing. Photo: Bloomberg

(Bloomberg) — Netease Inc. aims to list shares in Hong Kong June 11 and JD.com Inc. a week later, a person familiar with the matter said, completing two mega stock sales for the city at a time of escalating market volatility.

U.S.-listed Netease and No. 2 Chinese online retailer JD.com hope to gain approval for local debuts during listing-committee hearings Thursday, the people said, asking not to be identified discussing private matters. JD.com’s stock sale could raise $2 billion or more to help the e-commerce giant shore up its position in an increasingly competitive home market. The retailer’s June 18 target coincides with its largest annual online sales event.

The twin debuts follow Alibaba Group Holding Ltd.’s $13 billion Hong Kong stock sale last year, hailed as a homecoming for Chinese companies and a win for Hong Kong Exchanges & Clearing Ltd., which lost many of the largest tech corporations to U.S. bourses because it didn’t allow dual-class share voting at the time — a requirement that’s since been relaxed. Netease and JD.com are also listing at a time of escalating tensions between Washington and Beijing, now spilling over into Chinese companies’ access to U.S. capital markets after the collapse of Luckin Coffee Inc. shares — one of the country’s brightest startups.

Shares of U.S.-listed Chinese companies have seesawed since American senators overwhelmingly approved legislation Wednesday that could bar the country’s enterprises from American exchanges. The decision cast a pall of uncertainty over hundreds of billions of dollars of shares in some of the world’s best-known companies. China this week also moved toward national security legislation for Hong Kong, sowing panic in the city’s $5 trillion stock market.

Even if the delisting bill is eventually approved, the impact on China’s largest tech corporations remains unclear. American lawmakers have long raised red flags over the billions of dollars flowing into the Asian country’s biggest businesses, much of it from pension funds and college endowments in search of fat investment returns. Alarm has grown in particular that American money is bankrolling efforts by the country’s technology giants to develop leading positions in everything from artificial intelligence and autonomous driving to internet data collection.

Baidu Inc. founder Robin Li told the state-backed China Daily that the company was concerned about heightened scrutiny of Chinese companies and was constantly exploring options including a secondary listing in Hong Kong or elsewhere.