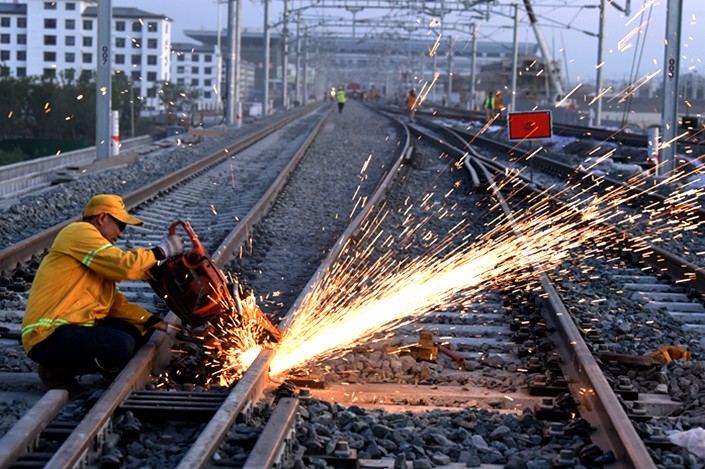 Investment in railway infrastructure has long been dominated by state-owned conglomerates like China Railway, given their scale and the time investors must wait for a return.

The central government will grant 50 billion yuan to the state-owned operator of the country’s rail network, while the rest will be raised by issuing bonds, the report shows.

The cash injection will ease financial pressure on railway construction, said Zhao Jian, professor at Beijing Jiaotong University. As of March 31, China Railway had 5.5 trillion yuan of debt, giving it a debt to asset ratio of 66.1%.

China had aimed to invest at least 800 billion yuan in fixed railway assets this year, which was not an ambitious target given last year’s 803 billion yuan investment. But even this modest aim might be hard to hit given the impact of the coronavirus pandemic on investors’ enthusiasm. Data from China Railway show that 147.7 billion yuan was invested in the first four months, down 9% year-on-year.

Some local China Railway branches have recently pledged to ramp up investment to make up for this deficit. The Shanghai branch promised on April 23 to increase its investment in infrastructure by 5 billion yuan to more than 90 billion yuan. A person at another local railway investment group told Caixin that they are planning to start some projects in 2020 that were initially scheduled for later.

Investment in railway infrastructure has long been dominated by state-owned conglomerates like China Railway, given their scale and the time investors must wait for a return. Even though the government has encouraged private enterprises to get involved, 93.5% of last year’s investment was made by China Railway.