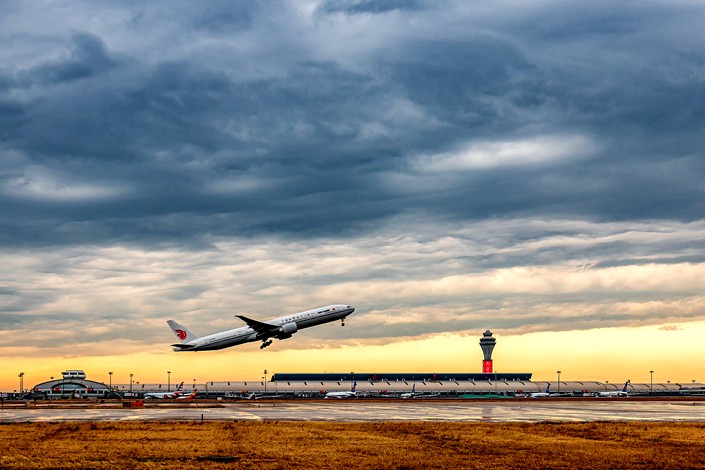 A flight takes off from Beijing Capital International Airport on Oct. 24.

The U.S. will require that all Chinese airlines flying between the two countries to submit their plans at least 30 days in advance of actual flights, a move that one observer said could be aimed at pressuring Beijing to allow American carriers to resume flights to China.

U.S. airlines voluntarily stopped flying to China in early February as the country’s Covid-19 was starting to crest. Caixin has learned that of the three main American carriers flying between the two countries, Delta Air Lines, United Airlines and American Airlines, applied as early as April to resume some of their flights. But they have been precluded from doing so by a Chinese policy freezing service between the country and rest of the world at levels as of mid-March.

In issuing a new order related to the matter on Friday, the U.S. Department of Transportation (DOT) expressly said it was “taking steps in response to the failure of the government of the People’s Republic of China (China) to permit U.S. carriers to exercise the full extent of their bilateral right to conduct scheduled passenger air services to China.”

The DOT’s steps included requiring seven Chinese carriers to file their existing flight schedules with the department by Wednesday. It also said the seven would be required to file their flight plans with the department at least 30 days in advance. The seven carriers include China’s three major state-owned carriers, Air China, China Eastern and China Southern; as well as the smaller Hainan Airlines, Beijing Capital Airlines, Sichuan Airlines and Xiamen Airlines.

A person at the Civil Aviation Administration of China (CAAC), China’s aviation regulator, told Caixin that the 30-day advance notice requirement could mean the earliest future flights that would meet that rule would be those set for the end of June. Accordingly, flights currently scheduled between Thursday and the end of June might have to be grounded if the two sides can’t resolve their impasse on the resumption of flights by U.S. carriers between the two countries, the source said.

The conditions that prevent U.S. carriers from resuming flights to China are contained in an order called the “Five-One” policy, which was rolled out by the CAAC on March 29. That order limited all domestic airlines to one international flight per week to any other country. Similarly it said that any foreign carrier could only operate one flight into China each week.

That policy, which was extended on May 20, also froze the number of flights that any airline could operate into China at no more than the level of service they were offering as of March 12. That condition effectively precluded all U.S. carriers and those from many other countries from restoring flights since they had canceled all their flights to China as of that date.

A source close to the CAAC said the agency’s determination to stick to the “Five-One” plan was aimed at preventing a resurgence in Covid-19 cases from people coming into the country. The DOT said it was told in a May 14 call that the CAAC was considering removing the condition that denied airlines permission to fly to China if they had no flights as of March 12. But the Chinese agency intends to keep the condition limiting each foreign airline to one flight into China each week, the department added.

In the beginning of January before the Covid-19 pandemic, there were 325 scheduled flights each week between China and the U.S. But by the middle of February, only four Chinese airlines were operating 20 flights between the two countries weekly. They had raised that to 34 weekly flights by mid-March.

Under the CAAC’s heavy restrictions, the broader number of weekly international flights into China dropped 90% to around 133, according to a Caixin calculations. The number of inbound travelers slid by 80% from 25,000 to 5,000 a day, according to caacnews.com, a news service affiliated with the CAAC.

Other foreign carriers that stopped flying to China, such as Lufthansa and Finnair, have also applied to resume some flights in June. But representatives from both said they are still awaiting approval for such resumptions.

Han Wei contributed to this story