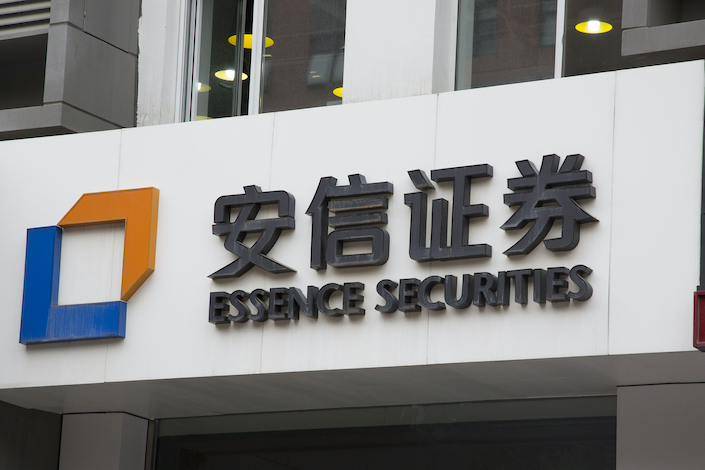 Essence Securities was involved with several violations in the past two years.

SDIC Capital Co. Ltd., a subsidiary of state-owned investment giant State Development & Investment Corp., announced the plan for a convertible bond sale Monday and said it will invest all the proceeds to replenish capital of its wholly owned securities arm Essence.

Essence is the latest brokerage house to bolster capital as regulators revise rankings of brokerages based on capital adequacy and profitability.

In 2019, Essence Securities lost its A rating after 10 years and was lowered to BBB. The rating drop was related to several fines for violations in the past two years. In 2018, a senior manager was banned from the securities market for five years after he was found using other people’s brokerage accounts to buy stocks; a branch was punished by the central bank for failing to verify client identification as required; and some staff members were fined 200,000 yuan for illegally trading stocks in clients’ accounts.

Essence Securities generated more than 80% of its parent’s profit in 2019. The brokerage reported net profit of 2.47 billion yuan, an increase of 63% from 2018 and ranking 16th in the industry.

SDIC Capital has had high expectations for the unit. In its 2017 annual report, the parent company said it aimed to build Essence Securities into a first-tier brokerage and investment bank serving large and medium-sized enterprises and middle-class and wealthy clients in the eight years from 2018 – 2025.

The parent company has been increasing capital injections to the unit since 2017. SDIC Capital injected 8 billion yuan into Essence Securities in October 2017, boosting its net capital ranking from 22nd to 16th. As of the end of 2018, the brokerage had net capital of 32.4 billion yuan, ranking 14th in the industry.

Correction: An earlier version of this story incorrectly identified Essence Securities, not its parent SDIC Capital Co. Ltd., as the convertible bond issuer. The name of its parent company was mistakenly spelled as Sinotex Investment & Development Co. Ltd.