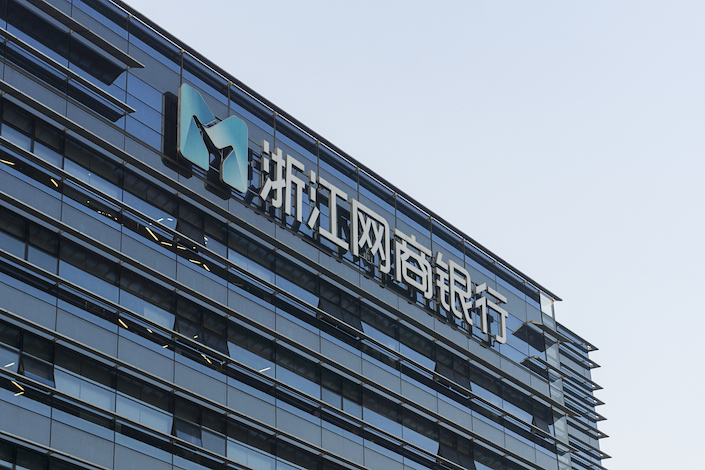 Officially known as Zhejiang E-Commerce Bank Co. Ltd., MYbank won approval to sell as much as 5 billion yuan ($698.1 million) of perpetual bonds to supplement its Tier 1 capital, according to a statement published by the China Banking and Insurance Regulatory Commission.

Perpetual bonds are a type of debt with no fixed repayment date. Issuers can either pay interest indefinitely or until they choose to pay back the debt. Accounting regulations allow perpetual bonds to be treated as equity rather than liabilities on balance sheets.

Zhejiang-based MYbank joins a series of Chinese lenders issuing perpetual bonds after regulators stepped up support for banks to recapitalize through bond sales since last year amid the economic slowdown. It was the first privately funded bank to win such approval.

MYbank expanded its registered capital from 4 billion yuan to 6.6 billion yuan after the investment. President Jin Xiaolong said in March the capital injection helped MYbank to cope with business changes during the Covid-19 pandemic but the company would need more funding to support future growth.

Dong Ximiao, chief analyst at Zhongguancun Internet Finance Institute, said private banks in general face capital constraints to back rapid business expansion since they started to emerge in China a couple of years ago. However, many private lenders have encountered limits on replenishing capital using bond and equity sales because of regulatory restrictions such as a requirement of three years of profitability for corporate bond sales, Dong said.

Wang Gang, a researcher at the Development Research Center of the State Council, a think tank, said perpetual bonds are a preferred option for small and medium-sized, nonpublicly traded banks to raise capital because of their lower cost and flexibility. Wang estimated that there will be potential demand for 374.5 billion yuan of perpetual bond sales by city commercial banks, rural banks and private banks in China.

This story has been updated to fix an incorrect yuan-to-dollar conversion in the story and in the headline. The correct number is $698.1 million.