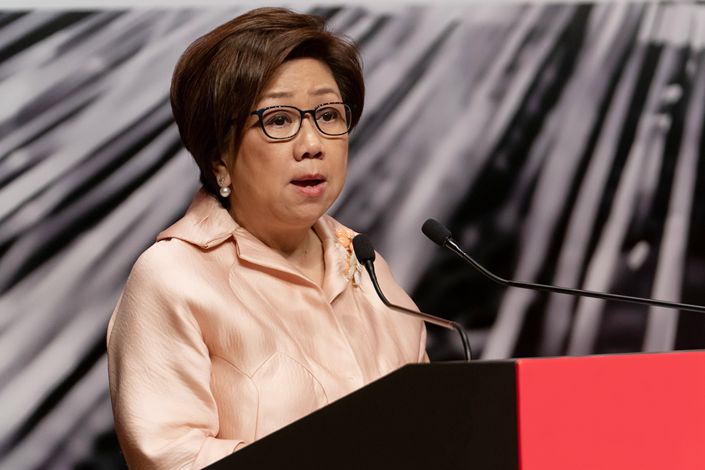 China’s proposed national security law for the Hong Kong Special Administrative Region (SAR) could trigger volatility in local financial markets in the short term, but will bring stability in the long run, the chairman of the city’s stock exchange said.

After investors have time to digest the news and the details of the law are unveiled, their concerns will be allayed and uncertainties will be reduced, Laura May-Lung Cha, the head of Hong Kong Exchanges and Clearing Ltd., told Caixin in an interview in Hong Kong on Wednesday. Cha has chaired the company since May 2018.

“Investors may still need two to three months to observe,” she said, adding that markets may fluctuate in the short run as the introduction and passing of the law may cause social unrest.

China’s National People’s Congress (NPC), the country’s legislature, on Thursday voted to approve a decision to draft legislation to safeguard national security in Hong Kong, a legal effort to restore stability in the region embroiled in nearly a year of social unrest that’s created uncertainty over the future of the Asian financial hub. The NPC Standing Committee will draft the law and it will be added to Hong Kong’s mini constitution, the Basic Law, which will then need to be promulgated and implemented by the Hong Kong government, according to the official Xinhua news agency.

Some critics claim that the law would weaken “One Country, Two Systems,” Cha said, referring to the basic principle behind the governance of the Hong Kong and Macao SARs. People should take a balanced and objective view of the proposed law, she said, noting that every country has the right and responsibility to safeguard its own national security interests and to introduce national security or anti-terrorism laws.

Hong Kong will remain a window for China's internationalization and international investors' confidence in Hong Kong's capital markets reflects their confidence in the economic prospects of the Chinese mainland, Cha said. If Hong Kong turns into an ordinary city like any city on the Chinese mainland, its functions and contributions to the country could be diminished, she added.

Hong Kong will still be an attractive destination for investors, she said. “International investors have confidence in the system of the Hong Kong market. In the 23 years since Hong Kong returned to China, the city’s market has continuously improved its legal system and supervision. Investors understand that Hong Kong is not a flawed and immature market.”

In order to reassure investors and improve sentiment, Cha proposed that authorities speed up the establishment of channels for capital flows between Hong Kong and mainland financial markets and promote the internationalization of yuan. This would help make the city’s markets wider and deeper so that its status as an Asian financial center can be secured.